Contrary to Some Academics’ Claims, the UN does NOT Legitimise Terrorism

Some of Israel’s opponents justify Palestinian terrorism by claiming that “Palestinians have a legal right to armed struggle”.

Supporters of terrorism often cite Resolution 3314 passed by the UNGA in 1974, adopting the Definition of Aggression Article 7:

“Nothing in this Definition, and in particular article 3, could in any way prejudice the right to self-determination, freedom and independence, as derived from the Charter, of peoples forcibly deprived of that right and referred to in the Declaration on Principles of International Law concerning Friendly Relations and Cooperation among States in accordance with the Charter of the United Nations, particularly peoples under colonial and racist regimes or other forms of alien domination: nor the right of these peoples to struggle to that end and to seek and receive support, in accordance with the principles of the Charter and in conformity with the above-mentioned Declaration.”

Article 3 however refers to a State attacking and occupying the territory of another State, which is not the case in the Israeli/Palestinian conflict. Moreover, the resolution does not mention armed struggle, certainly not against civilians of the “occupying” state. Moreover, UN General Assembly resolutions are not binding international law, only UN Security Council resolutions are legally binding.

“the legitimacy of the struggle of peoples for independence, territorial integrity, national unity and liberation from colonial and foreign domination and foreign occupation by all available means, including armed struggle.”

“the denial of the inalienable rights of the Palestinian people to self-determination, sovereignty, independence and return to Palestine and the repeated acts of aggression by Israel against the peoples of the region”.

Supporters of Palestinian terrorism interpret this as proof that international law permits terrorist attacks by Palestinians against Israelis, including some academics.

For example, Dr Brendan Ciarán Browne, an Assistant Professor Conflict Resolution at Trinity College Dublin who has defended Bahaa Abu Al-Ata, who was responsible for terrorist rocket attacks against Israeli civilians opined that

“any critical legal scholar truly invested in the cause of Palestine must nurture space in their classroom to evaluate the right of colonised peoples to agitate for self-determination, including through armed struggle as outlined in UN resolution 37/43”. 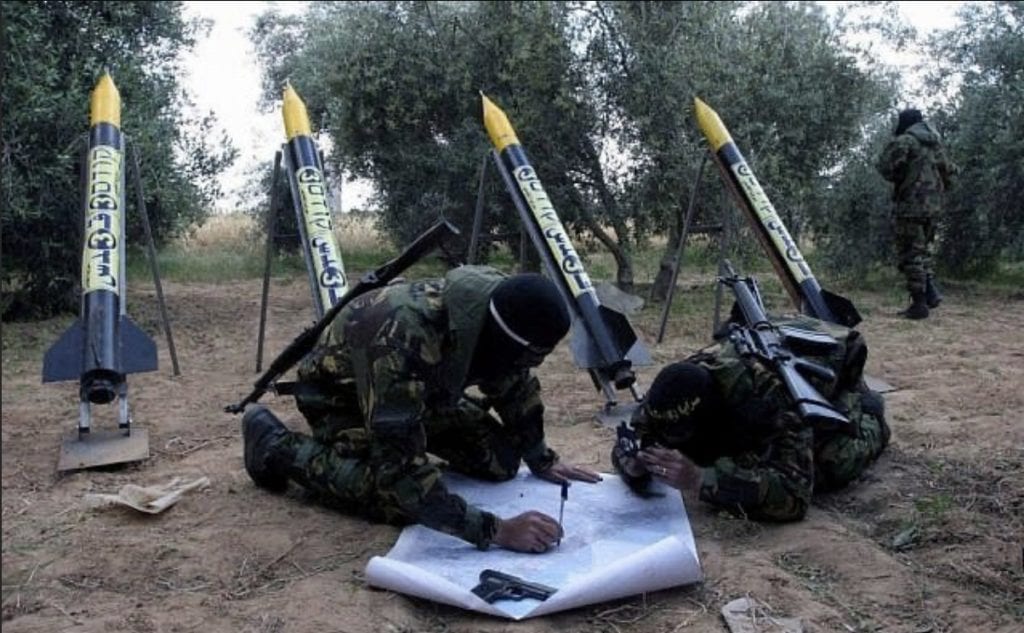 UN Security Council Resolution 1566 adopted unanimously on 8 October 2004, condemned terrorism as a serious threat to peace and strengthened anti-terrorism legislation. It reaffirmed that

“terrorism in all its forms and manifestations constitutes one of the most serious threats to peace and security.”

Further it recalls that:

“criminal acts, including against civilians, committed with the intent to cause death or serious bodily injury, or taking of hostages, with the purpose to provoke a state of terror in the general public or in a group of persons or particular persons, intimidate a population or compel a government or an international organization to do or to abstain from doing any act, which constitute offences within the scope of and as defined in the international conventions and protocols relating to terrorism, are under no circumstances justifiable by considerations of a political, philosophical, ideological, racial, ethnic, religious or other similar nature, and calls upon all States to prevent such acts and, if not prevented, to ensure that such acts are punished by penalties consistent with their grave nature”.

There are many arguments about the definition of terrorism as expressed by the cliché “One man’s terrorist is another man’s freedom fighter” which suggests that the question of who is a terrorist, depends entirely on the subjective outlook of the definer. Of course, this is over simplistic.

Oxford Dictionaries defines terrorism as “the unlawful use of violence and intimidation, especially against civilians, in the pursuit of political aims.”

As UN SC 1566 clarifies, terrorism intends to provoke a state of terror in the general public and to intimidate a population and often does this by deliberately targeting civilians.

Clearly, the UN does not legitimize terrorism.

Once an organisation engages in terrorism against civilians, it can no longer pretend it is a legitimate guerrilla organisation that engages in armed struggle against occupation and even its attacks against military targets lose legitimacy and become terrorism as well.

When an IDF soldier is attacked while in an operation to arrest terrorists, the attackers become terrorists as well. One such case occurred in 2018 when St.-Sgt. Ronen Lubarsky (HYD), a commando in the elite Israeli counter-terrorism Duvdevan unit was killed when a Palestinian dropped a marble slab on his head, while his unit was arresting terrorism suspects in Ramallah. Killing a soldier in such circumstances is murder in the context of aiding and abetting terrorism, not legitimate armed struggle as some, even in the Israeli Left, claim.

The Red Cross has confirmed that Article 2(1)(b) of the International Convention for the Suppression of the Financing of Terrorism means that the killing of non-combatant members of the armed forces or combatants hors de combat can be considered an act of terrorism, provided that it is done with the requisite intent, even if the act occurs during an armed conflict. The killing of military personnel outside the context of an armed conflict also could be considered a terrorist act under this provision, if done with the requisite intent, regardless of the means employed.

Not only is terrorism immoral, it is also specifically prohibited in international law. It is utterly shameful for academics and journalists to support terrorism and falsely claim that it is legally permitted.