The first recorded mention is found in the Annals of Innisfallen from 1079: “Five Jews came from overseas with gifts for Tairdelbach [a medieval King] and they were sent back again over sea”. It was an inauspicious start.

The spectre of anti-Semitism that has dogged Irish political and cultural life since the beginning of the 20th century began with the Limerick Boycott of 1904. Following a colourful Jewish wedding, a bitter report appeared in a local newspaper comparing the relative prosperity of the Lithuanian Jews to the grinding poverty of the native population.

Days later, Father John Creagh took to the pulpit and accused the Jews of usury and denounced them as freemasons and Christ-killers. If the people of Limerick wanted to end Jewish extortion, he barked, they should boycott Jewish goods and services.  Arthur Griffith, who would shortly found the Irish Republican political party Sinn Féin, echoed the call for a boycott. No longer welcome and unable to trade, the Jewish population was forced out of the city.

Ireland also has uncomfortable associations with Nazi Germany. Charles Bewley, Irish Ambassador to Berlin from 1933 to 1939 was an unashamed Nazi supporter and rampant anti-Semite. According to Professor Bryan Fanning of University College Dublin, he appears to have gone out of his way to prevent hundreds of Jewish refugees from escaping Nazi Germany to Ireland by denying them visas, even when they had already been approved by the Dublin government. Ireland’s Taoiseach (Prime Minister) Éamon De Valera caused international outrage when he officially expressed his condolences on the death of Hitler, with Ireland’s first President Douglas Hyde also calling Germany to relay Ireland’s sympathy.

Meanwhile, Otto Skorzeny, Hitler’s favoured Nazi commando arrived in Ireland in 1957 where he was feted by Dublin society at a reception held in his honour. In Hidden History: Ireland’s Nazis, a 2007 documentary by Irish State broadcaster RTÉ, presenter Cathal O’Shannon estimated that between 100 and 200 Nazis moved to Ireland following WWII. O’Shannon says “I’m not sure that the full horror of Nazi atrocities had sunk in in Ireland. There may also have been an attitude among certain nationalists that ‘my enemy’s enemy [Britain] is my friend’. Irish attitudes to Nazis changed from the 1970s on, as issues such as the Holocaust entered public consciousness.”

Fast forward to 2018 and there is a justified perception, especially amongst the Irish Jewish community and those who believe the Jews have a right to a protected homeland in the State of Israel, that political beliefs relating to the Israeli-Palestinian conflict are directly linked to instances of anti-Semitism. In an article from The Irish Catholic, Chairperson of the Jewish Representative Council of Ireland (JRCI) Maurice Cohen said “There are times when some Irish Jewish people would be conscious of not being overt about their Judaism, for example wearing the kippah in public.”

Ireland has a long and vocal history of supporting the Palestinians, drawing parallels with them as a people colonised for centuries under foreign occupation. The perception of the Palestinian Arabs as the archetypal underdog elicited an emotional response within the Irish psyche that started around the time the Zionist movement accepted the partition of Palestine, and it continues to inspire pro-Palestinian Irish activism to the present day.

Anti-Israel rhetoric is widespread amongst the socialist far-left and it is now gaining ground on Irish university campuses.  In March of this year, the Trinity College Dublin chapter of Students for Justice in Palestine (SJP) voted to endorse the boycott, divestment and sanctions (BDS) movement which targets the Jewish State. A second chapter of SJP was launched at Dublin City University (DCU) in September.

A pro-Israel student who spoke to The Algemeiner about entrenched anti-Semitic attitudes towards Jews by a minority of Trinity students noted that one bigot targeted a specific Jewish Trinity professor, calling him a “f**king Jew.” The walls of the campus bathrooms were daubed with anti-Semitic graffiti, including  “Gas Gas Gas the Jews, I’m Gonna Step On The Gas” “Stop Zionism” and “Israel Did 9/11”. 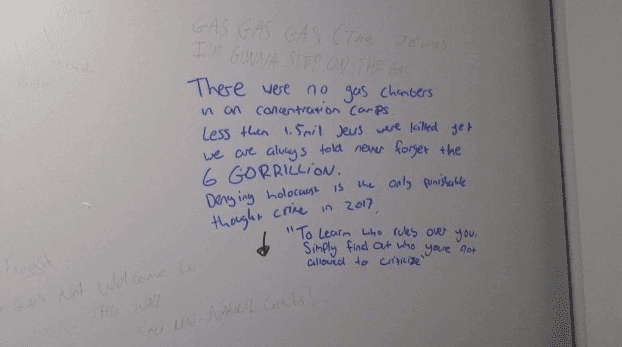 Horrific anti-Semitic graffiti in the bathrooms of Trinity College

Such graffiti is thankfully rare. The only other reported incident this year appeared opposite a Dublin cinema screening of Irish Jewish film director Lenny Abrahamson’s work. In a sinister attempt to propagate a conspiracy theory that Jews control the global financial market, the words “Kalergi Plan” were spray painted on a wall in large black capitals alongside a blue Star of David. It was swiftly removed by the local council.

The founder of Ireland’s only campus Friends of Israel Society at Dublin’s Maynooth University, a non-Jew, was physically attacked last year while he was managing a kosher bake sale booth in aid of charity.  His student attacker smashed his phone against a wall and shouted “F*** Israel, Free Palestine.” Daniel O’Dowd, the Society’s current President said “Anti-Semitism in Ireland fails to distinguish between pro-Israel activists and Jews, so both are equally exposed to bigotry.”

Jennie Harrison, Trustee of the Dublin Jewish Progressive Congregation has experienced a number of anti-Semitic incidents over the years and says that many in her community are feeling vulnerable and scared, especially after the Pittsburg massacre. “It only takes one crazy person and suddenly 11 people are dead simply because they went to shul”.

Robert Reuven Pass moved to Ireland over 10 years ago, considering it a good and safe place to live. A religious Jew, his kippa makes him immediately recognisable. “At first there were no problems and people were friendly when they heard I was from Israel. Then one day we stopped at a rural petrol station and someone asked me why I killed Jesus, and how could I live with that.”

Robert senses the atmosphere has changed for the worse in the last few years. “I can feel it. I hear the comments about baby killers and murderers. The anti-Israel movement is fuelled by old-fashioned anti-Semitism and the myth that the conflict mirrors the Irish struggle for independence. There are some places in Dublin where I wear a baseball cap over my kippa, or keep it in my pocket. I just don’t feel safe here anymore. If I can’t proudly wear my religious symbols or openly show solidarity with my country, something is wrong. But still, despite all of this, I believe that Ireland is the best place in Europe for Jews.”

It is common knowledge that media bias fuels persecution of Jews around the world, so many people were shocked and dismayed when a disgraceful interview with veteran Irish broadcaster Mike Murphy was aired recently on Ireland’s national broadcaster RTÉ, especially in light of Ireland’s membership of the IHRA, which holds that “drawing comparisons of contemporary Israeli policy to that of the Nazis is anti-Semitic”. 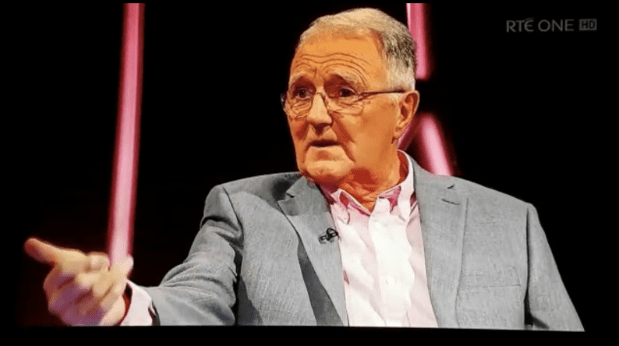 Murphy, who wishes to see Ireland boycott next year’s Eurovision in Tel Aviv, stated it was “a shame that the Israeli and Jewish people, who have gone through what [they did] in the Holocaust, are now doing what they are doing to the Palestinian people, which is unconscionable. The abused have become the abuser”. He then went on to make the outrageous claim that Israel would “propagandise” the Eurovision, “similar to what the Nazis did in the Berlin Olympics in 1936”, by cleansing any evidence of racial discrimination.

Similarly, when the Ireland Israel Alliance wrote to publicly elected City Councillors regarding Israel’s Nation State Basic Law, one particular Councillor responded with: “Congratulations, Hitler would be proud of you” and “the abused has become the abuser”. These blatant, open, anti-Semitic comparisons with Nazi Germany from keyboard warriors are almost par for the course, but when they come from our elected representatives and public broadcasters, you know Ireland has a big problem.