Ireland Israel Alliance supporters had a pleasant surprise on the morning of February 18, when the online news service of the Irish national broadcaster RTE reported on the overnight snowfall in Jerusalem with the headline “Jerusalem challenge: Rare snowfall in Israel’s Old City” (our emphasis).

The article was illustrated with a relatively neutral view including churches, synagogues and mosques, reflecting the fact that in Israel all three monotheistic faiths worship freely side by side. Only under Israeli rule has this been possible in modern times. Under previous Arab Jordanian rule from 1948 to 1967, Jews were expelled from the Old City, synagogues were demolished, religious books were destroyed, the Mount of Olives graveyard was desecrated and even Arab Christian access to the Old City was severely restricted. 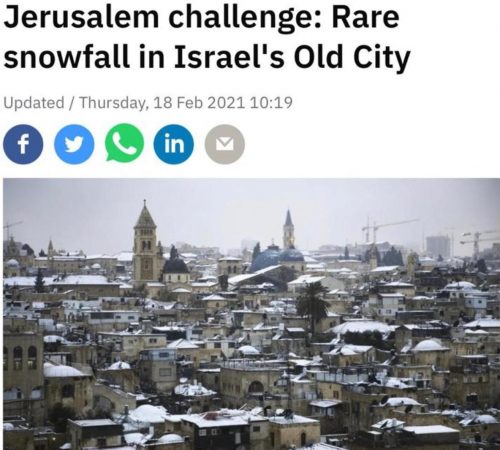 On Twitter, RTÉ included a happy video of a children’s snow fight.

This pleasant state of reporting survived for about 7 hours, but just after 5pm RTÉ suddenly deleted its tweet and edited its report. Not only did all mention of Israel disappear, but the accompanying photo had changed to provide a distinctly political message. 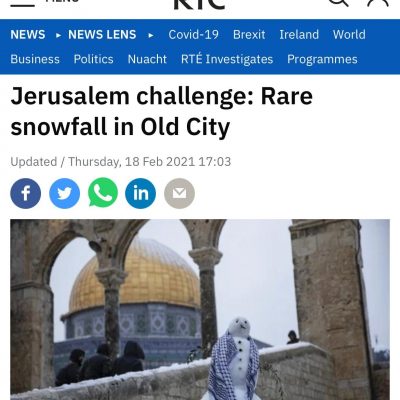 The story is now illustrated with a keffiyeh-clad snowman on the steps leading to the Dome of the Rock in the Al-Aqsa compound – built on top of Judaism’s Temple Mount. RTÉ has contrived to airbrush both Jews and Christians out of Jerusalem’s Old City. RTÉ has also edited the image description which referred to “the authorities” shutting down public transport, because of course both the authorities and the transport in question are Israeli.

The result of this not-so-subtle editing is to create a decidedly Palestinian perspective of the Old City.

All of this raises several questions. How was this editorial decision taken? Was RTÉ pressured or intimidated into changing its headline and accompanying photo? Or is this just a continuation of the anti-Israel agitation we’ve sadly come to expect of RTÉ?

Someone at RTÉ who wrote the original headlines and tweet knows that the Old City is part of Jerusalem, and will remain part of the undivided capital of Israel in any future peace deal. It is disappointing that RTÉ is unable to report on a simple snow story without introducing a twisted political agenda.