The Refugees that the World Forgot

No ethnic or religious community has a longer documented history in the Middle East than the Jews. There were Jews in countries such as Egypt, Syria, Iraq, and Iran stretching back into the mists of time. There were smaller communities in almost every other North African and Middle Eastern country. Over 1000 years before the birth of the Prophet Muhammad and before a word of Arabic was heard outside of the Arabian peninsula, there were Jews going about their business, attending Synagogue, getting married, having children and celebrating the various Jewish festivals.

They were the indigenous people

To say that they were well integrated with the indigenous people – as some have stated – is completely missing the point. When your ancestors have been in a country for well over 2,000 years, you ARE the indigenous people. They were usually a well-educated group, contributing to their countries vastly out of proportion to the small size of the community. Yet, all of this history was to be erased in a few years of hatred and violence in the 1940s and 1950s. 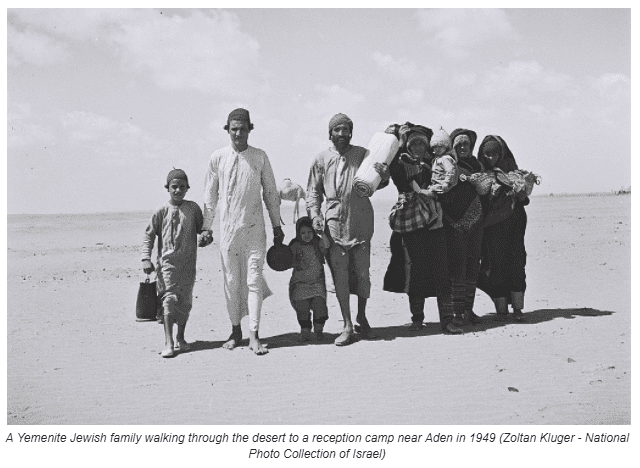 The first sign that countries in the Middle East were turning against their ancient Jewish communities came in the 1920s with the rise of Arab and Islamic nationalism. In August 1929, in what was British-adminstered Palestine, 67 Jews were murdered in a three-day orgy of violence and slaughter. As many as 800 Jews were murdered in 24 hours of bloodletting in Baghdad in June 1941 during the horrific Farhud massacre. In the years that followed, almost all Middle Eastern and North African countries launched crusades against their Jewish citizens through a combination of violence, intimidation, boycotts, expulsion from employment, confiscation of businesses, and denationalization (revocation of citizenship). Between 1945 and 1947, more anti-Jewish pogroms and violence swept across the Islamic world with massacres in Libya, Aleppo, Damascus, Aden, Alexandria, and Cairo with the murder toll running into hundreds.

The exodus you’ve never heard of

Increasing violence and discrimination forced a mass exodus of Jews from Arab and Islamic states with the result that some 900,000 had to flee from their ancient homelands usually with little more than their clothes on their backs. Some ended up in France or the USA but the majority of them moved to Israel. Behind them, they left their houses, wealth, synagogues, hospitals, schools, and shrines. However, most of all they left behind their history.

No flags flying for Jewish refugees

The number of Jewish refugees – 900,000 – is significantly greater than the even the highest estimates of the number of Palestinian refugees. However, no-one ever speaks of their right of return. They don’t have their very own refugee agency such as the UNRWA (United Nations Relief and Works Agency which works with and only with Palestinian refugees). No United Nations resolution has ever been passed noting the injustices visited on them. No politicians have ever organized to have their flag fly over a public building in any Irish city. But even now, across the tiny State of Israel, elderly matriarchs cherish photographs and memories of houses, communities and lives from Morocco to Iran that have been lost forever.

There’s no doubt that part of the reason for this is due to their refusal to embrace victimhood or to pass that sense of victimhood from generation to generation. If – like the Palestinians – they had chosen the path of terrorism to highlight their cause, the world might know more about the injustices inflicted on them.

However, that doesn’t in any way lessen the injustices inflicted on the Jewish refugees. We have a saying in Irish: Bíonn dhá insint ar gach scéal agus dhá leagan déag ar gach amhrán. This means “There are two sides to every story and 12 versions of every song”. As long as the international community fails to understand that focusing on only Palestinian refugees is focusing on only one side of the story, the international community will not be capable of contributing to a fair resolution to the Israel-Palestine issue.

Remember them today, November 30th, a day set aside by the Knesset since 2014 to commemorate the Expulsion of Jews from Middle Eastern and North African Countries. Because the world has chosen to forget them.