No right of return for Iraqi Jews

Ethnic Germans fled or were expelled from countries all over eastern Europe. Millions of Poles were exiled from areas annexed by the Soviet Union while hundreds of thousands of ethnic Ukrainians and Belorussians were forced to leave Poland for the USSR. Similar numbers of Estonians, Latvians, Lithuanians, and Croatians also had to flee their homes.

Hundreds of thousands of Jewish survivors of the Holocaust were trying to get to their ancient homeland in what was British Mandate Palestine. Meanwhile, the disastrously handled partition of India in 1947 resulted in 15 million refugees fleeing to or from the new state of Pakistan.

The re-emergence of the State of Israel in 1948, after over 2,000 years resulted in the displacement of some 700,000 Arabs from the area to neighbouring countries. Even Palestinian sources admit that many of these refugees were encouraged to leave by their own Arab leaders. Be that as it may, while all the other displaced peoples mentioned in the first two paragraphs have long since settled into their host societies where they and their descendants enjoy the same rights as other citizens, the former Arab residents of what is now the State of Israel continue to be defined as “refugees” by the international community. Facing discrimination and sometimes massacre from their fellows Arabs, they demand the unconditional right to return to Israel.

Of all the refugees of the mid-twentieth century, the ones that have been most forgotten are the former Jewish residents of Arab countries. Somewhere between 850,000 and one million Jews from Arab countries were forced to leave their homes and to flee from the countries where they had lived for millennia. There were Jews living in countries such as Egypt, Syria and Iraq a thousand years before a word of Arabic was heard there. However, faced with increasing discrimination, violence, seizure of their businesses and properties, and revocation of their citizenship, they were left with little choice but to leave.

While there has been a long history of anti-Jewish pogroms in Arab countries, the worst example in the middle decades of the 20th century was probably the Farhud Massacre in Iraq in June 1941 in which somewhere between 700 and 800 Iraqi Jews were murdered in two days of bloodletting in Baghdad. Towards the end of the decade, faced with virulent antisemitism from Iraqi leaders, execution, imprisonment and increasing restrictions on their rights, the ancient, but wealthy and well-integrated Iraqi Jewish community had no choice but to flee to Israel leaving their wealth and property to be seized by Iraqis. They and their descendants now number some 450,000 and they are a thriving and proud community. 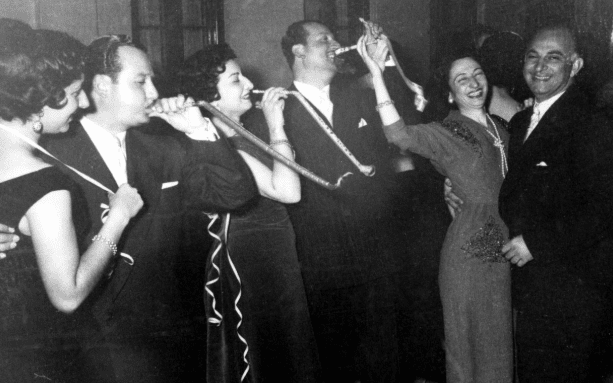 One of the many society parties held by Baghdad’s Jewish population before Farhud and the expulsion (Credit: Family Archive)

This tragic issue was recalled recently on Iraqi television in an interview with the head of the Citizenship Department in Iraq’s Ministry of Interior. In a discussion on the rights of persecuted religious minorities to return to Iraq,  Fadhi Alwan Kazem – who interestingly is also a general in the Iraqi army – drew a distinction between Jews and all other religious minorities. Iraqi Jews will not be allowed to return to Iraq or to have their Iraqi citizenship restored to them, said the general. Another interviewee, an Iraqi MP,  attempted to put some gloss on what is an obviously sectarian and anti-Jewish policy, intervening to say that this only applies to Iraqi Jews who are now Israeli citizens because “Israel is an enemy of Iraq”. However, this is nothing more than deceitful sophistry. When they were being forced to leave, Iraqi Jews had nowhere to go apart from Israel so effectively it applies to pretty much all Jews of Iraqi origin and their descendants.

In just over a month, on May 15th, many people around the world will be commemorating Nakba Day to mark the displacement of Arabs from what is now the State of Israel. Less well known is the fact that in 2014, November 30th was declared the first Day to Mark the Departure and Expulsion of Jews from the Arab Countries and Iran and it has been commemorated ever since.  The fact that the vast majority of Iraqi Jews and their descendants are now living their lives in Israel, a stable, prosperous and democratic country does not mitigate the injustice of what was done to them. Nor does it lessen the guilt of those who seized their property and forced them to leave and the international community is failing in its most basic duty by ignoring their cause.