An open letter to Richard Boyd-Barrett

I attended the debate between TD Richard Boyd Barrett of People Before Profit and Mark Humphreys of DCU in the Eblana Club, Dun Laoghaire on October 27, and I have a few observations on the remarks made and questions posed by Deputy Barrett.

Israel is a state “based on racism, ethnic cleansing, and colonisation”

Deputy Boyd-Barrett likes to quote statements made in the 1930s by future Israeli leaders who indicated that the only way for Zionism to succeed was to evict the Arabs from the land. He deplores the planned “ethnic division of the land”.

I have two responses to this.

First, it’s possible at least one of the quotes attributed to David Ben-Gurion is false, and his actual words were that “there is enough room for us and for the Arabs in the land [of Israel]”. But yes, some Zionists said some of those things in the 1930s. However, it is unfair to judge attitudes of the 1930s and 40s through a modern lens. Ethnic division was very much seen as a solution to ethnic tensions in the first half of the 20th century.

Between 1945 and 1950, millions of ethnic Germans fled or were expelled from Russia, Poland and surrounding Central and Eastern Europe. Estimates vary, but between 12 and 15 million people were transferred to German territory and at least 500,000 people died in the flights and expulsions.

When India and Pakistan were created, up to 15 million people were displaced and a million are thought to have died as Hindus and Muslims migrated in opposite directions across the partition line. 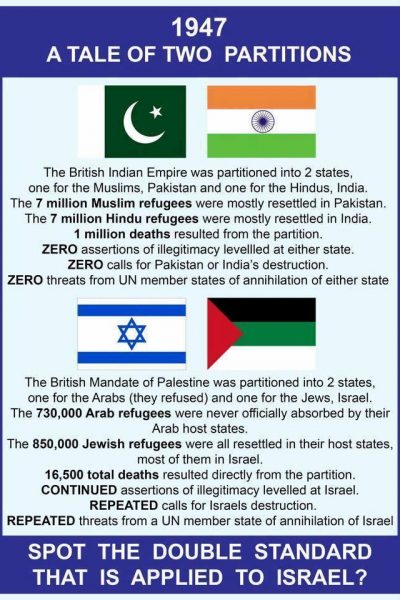 That ethnic separation was seen as a satisfactory solution is clear from the UN Partition Plan for Mandate Palestine, (UNGA Resolution 181) which posited the creation of independent Arab and Jewish States with equal rights for the minority populations in each.

Second, the Declaration of the Establishment of the State of Israel clearly accepted the participation of an Arab population in the new state. Its  first article says:

THE STATE OF ISRAEL will be open for Jewish immigration and for the Ingathering of the Exiles; it will foster the development of the country for the benefit of all its inhabitants; it will be based on freedom, justice and peace as envisaged by the prophets of Israel; it will ensure complete equality of social and political rights to all its inhabitants irrespective of religion, race or sex; it will guarantee freedom of religion, conscience, language, education and culture; it will safeguard the Holy Places of all religions; and it will be faithful to the principles of the Charter of the United Nations.

WE APPEAL – in the very midst of the onslaught launched against us now for months – to the Arab inhabitants of the State of Israel to preserve peace and participate in the upbuilding of the State on the basis of full and equal citizenship and due representation in all its provisional and permanent institutions.

These are not the words of a State intent on the eviction or marginalisation of its non-Jewish population.

The “One democratic state with equality for all”

This might be Deputy Barrett’s favourite expression, his most fervent wish for a peaceful, socialist solution to the Israel-Palestinian conflict, and I totally understand. Peace, love and falafel – why can’t people just get along together?

Ciarán Ó Raghallaigh has already written one dismissal of this daydream, a dream my old school headmistress might have described as “cloud cuckoo land”. But does anyone pay attention to what Palestinians say they want?

If Palestinians don’t want a one state solution with equal rights, or a two state solution, what’s left? By implication, do they prefer a single state but not equal rights? The PCPSR survey doesn’t ask them. But others do, notably the YouTube channel “The Ask Project”, which poses questions to random members of the public in Israel and the West Bank.

In one recent episode, Palestinians were asked “Does ‘Free Palestine’ mean destroy Israel?”, one or two respondents thought Israelis and Palestinians could live together in peace. The majority, however, thought the Jews would have to leave – go back to “where they came from”, the world is a big place, let them find somewhere, anywhere but not with Palestinians.

In another episode, Palestinians were asked “Are you willing to share the land with the Jews?”, and respondents were almost unanimous in rejecting the concept of sharing “their land”.

Deputy Boyd Barrett argued on Thursday that nothing good has ever come from dividing people along ethnic lines. He may have a point, if he’s referring to apartheid in South Africa, or segregation in the United States. Both of these horrific systems were dismantled by civil protest.

I would point to a possible corollary though. Forcing people of disparate religious and ethnic backgrounds into one state has usually ended extremely badly. The break-up of the former Yugoslavia might provide a grim example of what happens when ethnic tensions and nationalistic tendencies combine – the result is war crimes and genocide. Could this be the future for Israel and Palestine in a “one state” solution?

Palestinian society is largely conservative. LGBT rights are non-existent and a young gay Palestinian man seeking refuge in Israel was recently kidnapped to Hebron, murdered and beheaded. Girls in Gaza are obliged by Hamas to wear headscarves to school or face expulsion. Christians are increasingly under threat. In comparison, Israel is liberal, with equal rights for women, LGBT+ people and minority religions. It seems impossible to merge two such disparate populations.

The displaced populations of ethnic Germans in Europe, and of Hindus and Muslims in India and Pakistan, vastly outnumber the Palestinians displaced in the 1948 and 1967 Israeli-Arab wars – but none of those Germans, Hindus or Muslims, or their children, grandchildren and great grandchildren, are still refugees today, and none of them are pleading a “right to return”. They didn’t get a dedicated UN agency to look after them, and they settled into their new countries and became citizens there. Why should Palestinians be any different?

The influx of up to 5 million Palestinian refugees into modern Israel wouldn’t just create an Arab-majority, Muslim-majority state, overturning the UN plan for a Jewish state, it would create a logistical nightmare. Where would they live? Most of the places the original refugees fled have been built over or lie in ruins. You can’t just invite 5 million people to show up and expect to be housed and fed – the entire land area of “green line” Israel is smaller than the area of Munster.

Here’s the bald truth. The UN Partition Plan anticipated a Jewish and an Arab state. I make no apology for siding with those who believe the Jewish people are entitled to a state of their own, in the land where their faith, language and culture was formed. They endured 2.000 years of exile in Europe and across the Middle East and North Africa, after being thrown out of Jerusalem by colonising Romans, sometimes tolerated or even thriving (for a while) but often suffering pogroms, blood libels, religious hatred, segregation into ghettoes and discrimination.

There is significant debate in Israel and elsewhere over how and if the country can remain democratic and Jewish, and many believe that would be impossible in a one-state solution. Personally I’m pessimistic about the prospects for any change in the status quo, at least in the short term.

But I also think we Europeans should butt out of demanding specific “solutions” and stop encouraging Palestinian “anti-normalisation” – how can Israelis and Palestinians ever find peace without normalising some sort of relationship? Ireland should simply facilitate peace talks without imposing pre-conditions.

Deputy Boyd Barrett was very fond during the debate of quoting from his little (Ben) White Book of Awful Things Said By Zionists.

At least the Zionists of the early 20th century were only reflecting the zeitgeist when they considered transferring Arabs out of Israel. In comparison, Hamas leader Yahya Sinwar incited Palestinians, during the (supposedly peaceful) Gaza Border protests, to take down the border and tear the hearts out of Israelis. Hamas has previously promised to “wipe out Israel”. 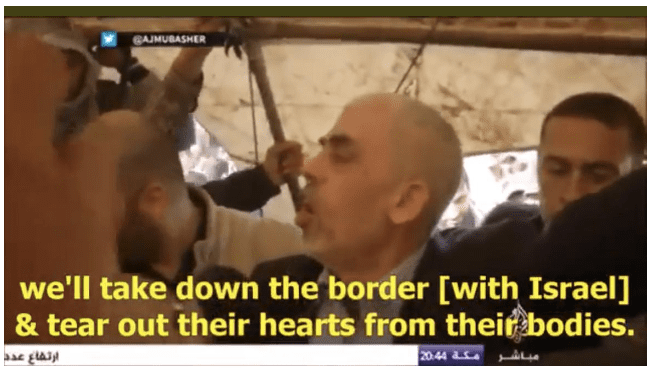 IIA has already documented the ability of Palestinian Authority President Mahmoud Abbas, with whom Israel is supposed to negotiate a peace settlement, to present a moderate side to the UN and Western leaders while making antisemitic, terror-supporting speeches to Arab audiences.

He has made speeches praising the actions of “Martyrs” who have murdered Israeli civilians and claiming that Jews defile Christian and Muslim holy places with their “filthy feet”.  In Germany this year he claimed Israel had committed “fifty Holocausts”.

Last week he was reported to have said he supports the recent increase in violence in the West Bank, but he can’t do so publicly because of “international agreements”.

I’ll finish with wise words to from Golda Meir: 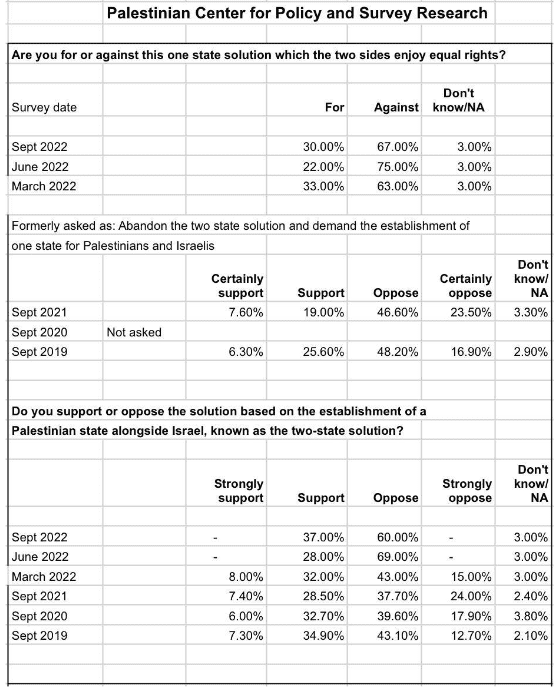