A man who shows such contempt for the lives of his compatriots - including pregnant women and children - will have no regard whatsoever for Israeli lives should he ever obtain the power to do to Israel what the Iranian regime has been threatening to do for decades.

On Friday June 18th last, Iranians went to the polls to elect a new president. This was the thirteenth presidential election in Iran since the establishment of the Islamic Republic in 1979 and the winner was subsequently declared to be Ebrahim Raisi who won 62% of the vote, going by initial figures. While western media will mainly focus on his ultra-conservative views, in Iran he is known for his involvement in a very dark period of Iranian history.

The first sentence in the previous paragraph should probably be rephrased as “some Iranians went to the polls” since – by all accounts – the turnout was abysmally low. Initial official reports put the turnout at about 37%, barely half that of the previous presidential election in 2017. However, even that low figure doesn’t tally with reports of bored election workers taking naps or watching videos on their phones – a far cry from the long queues that used to gather outside polling stations in previous elections.

The 17.89m votes that Raisi got in Friday’s election weren’t much more than the just under 16m votes he got in the same election in 2017. The fall in turnout can be judged by the fact that the 16m votes in 2017 represented a heavy defeat for Raisi while the 17.89m votes on Friday last amounted to a landslide victory. 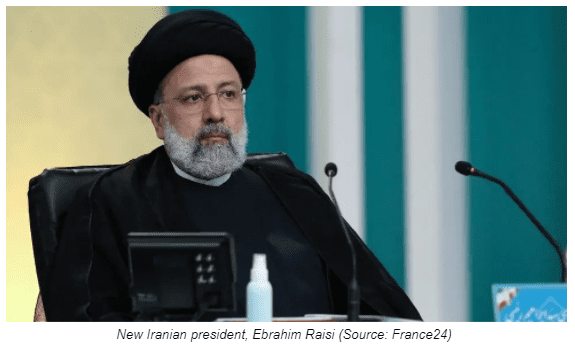 One could not blame ordinary Iranians for not bothering to vote. The election had been rendered meaningless when any candidate that could be remotely considered as a true reformer was barred from running by the Council of Guardians, also known as the Shura. All female candidates were also barred from running. Also, anyone who is not a Shia Muslim can’t even apply to be a candidate. All candidates must belong to the Twelver branch of Shia Islam. So anyone who is not a Shiite – including Sunni Muslims, Christians, Jews, Baha’is, Zoroastrians or secular people – cannot run for the presidency.

Iran has a horrific record on capital punishment. Excluding China, which keeps its executions as a state secret, more than half of all recorded executions in the world in 2020 took place in the Islamic Republic and the record of the new president suggests that that is unlikely to change. Readers may be familiar with the name of Iranian wrestler, Navid Afkari who was hanged by the regime last September for an alleged murder during anti-regime protests in 2018. All evidence points towards his having been tortured into confessing and it is further alleged that Raisi was the one who ordered his execution, as only one of some 500 people he has ordered to their deaths when he was head of Iran’s judiciary.

However, Raisi’s predilection for the hangman’s noose long predates 2020 and it’s his involvement in the execution of thousands of people in 1988 that still fills many Iranians with horror. In the late summer of that year, the Iranian regime executed thousands of political prisoners, some reports put the death toll at closer to 30,000. These executions were carried out in the aftermath of the Iran-Iraq War and most of those executed were members of the leftist Islamist group, Mujahedin-e-Khalq (MEK – People’s Mujahedin).

The MEK were initially enthusiastic supporters of the 1979 revolution but soon turned against the reactionary and conservative orientation of the new regime, culminating in the 1983 decision to ally themselves with Iraq. In one of the last military operations of the Iran-Iraq War in July 1988, they staged a military incursion into Iranian territory with Iraqi support but were repulsed by Iran.

We don’t know if these events singled out the group for particular attention from the Islamist regime but there is no doubt that thousands (perhaps up to 30,000) of prisoners who were in any way associated with the MEK (along with some other regime opponents) were executed during the late summer of 1988. Again and again and again, the reports refer to four or five individuals – a Death Committee – who administered the executions and on each occasion, one of the members of the Death Committee is listed as Ebrahim Raisi. 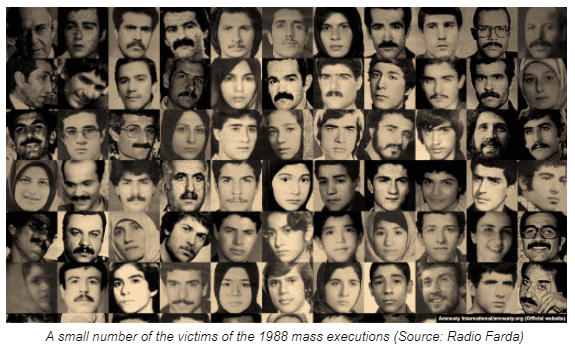 As if the injury of losing their loved ones was not enough, the families of those executed now face the insult of not knowing where they are buried. The bodies are interred in unmarked graves in various Iranian cities including the Khavaran cemetery in Tehran. Families of the execution victims often gather there to commemorate them and demand accountability.

Of course, Raisi is vociferously anti-Israel, describing the Jerusalem government as “a child killer and aggressive regime”. The irony of this remark would appear to be lost on him considering how his regime routinely executes pregnant women and children. Under Iranian law, it is permissible to execute a girl as young as nine years old.

The contrast with Israel

As one of two Middle Eastern nations that are currently experiencing a change of leaders, Iranians can only look west with envy towards Israel where the government and presidency have recently changed hands. Ordinary Iranians are facing into many more years of being ruled by a regime that will be exclusively male, exclusively conservative, and exclusively rooted in the most hardline of Shia and Islamist orthodoxies with no safe outlet for expressing opposition.

By contrast, the new Israeli government is the most diverse in its history and one of the most diverse in the world. It’s not just politically diverse, bringing together leftists, centrists, and rightists, an Arab political party with pro-Zionists.It’s also diverse in the backgrounds of the new ministers who include an Ethiopian-born woman, an openly gay man, someone from the Israeli-Arab community, people from the former Soviet Union and a woman with a disability. The new energy minister (Karine Elharrar) has muscular dystrophy and is a wheelchair user.

Shortly before the election of the new government, the Knesset also elected a new president. He is Isaac Herzog (a man whom we’re proud to partly claim as being of Irish extraction) and his style and outlook couldn’t pose a greater contrast to Ebrahim Raisi. While the role of the president in Israel is – as in Ireland – largely ceremonial, the holder of the office is expected to be a unifying force in the nation. In his acceptance speech, Herzog lavished praise on his rival Miriam Peretz calling her “an inspiration for every Israeli” and an “Israeli hero”. He also vowed that he would work to heal divisions in the country, to lend “an attentive ear to every position and respect every person,” while also working to “identify the lines that connect us and build bridges of agreement in order to bring together even the furthest apart, here within Israel and with our brothers and sisters in the Diaspora.”

The hardline outlook of Ebrahim Raisi is not merely a domestic Iranian issue. He is now the leader of a regime that is still seeking in various ways to expand its nuclear weapons program and makes no secret of its irrevocable hostility to the State of Israel. A man who shows such contempt for the lives of his compatriots – including pregnant women and children – will have no regard whatsoever for Israeli lives should he ever obtain the power to do to Israel what the Iranian regime has been threatening to do for decades. The world must ensure that such an appalling vista will never come to pass.