Pleas from Ukrainian leaders from right across the democratic spectrum for boycotts of Russia are not just ignored but are cited as reasons to be less supportive of their cause. Meanwhile, far more questionable pleas from Palestinians for boycotts of Israel are treated as unquestionable dogma.

Yesterday, April 6th 2022, the president of Ukraine, Volodymyr Zelenskyy addressed a joint session of the Oireachtas (the two chambers of the Irish Parliament which consists of the Dáil and the Seanad). In an impassioned speech describing his country’s struggle to repel the barbaric Russian invasion, Mr Zelenskyy received thunderous applause on numerous occasions during his speech as well as a standing ovation at the end.

However, members of the far-left PBP (People Before Profit) party refused to take part in the standing ovation (1). Later in the afternoon on Newstalk FM (2), one of the party’s TDs, Brid Smith, tried to explain the actions of her and her colleagues. She said that she was against Zelenskyy’s call for “more stringent sanctions on the Russian people” saying that sanctions “will hurt and severely hurt the Russian people”

Most pro-BDS party in the Oireachtas

Bearing in mind that her party is arguably the most pro-BDS party in the Oireachtas, the interviewer challenged her asking, “Do sanctions hurt ordinary Israeli people?” Smith replied “The point about the Israeli sanctions….we support sanctions against Israel because of the illegal settlements”. 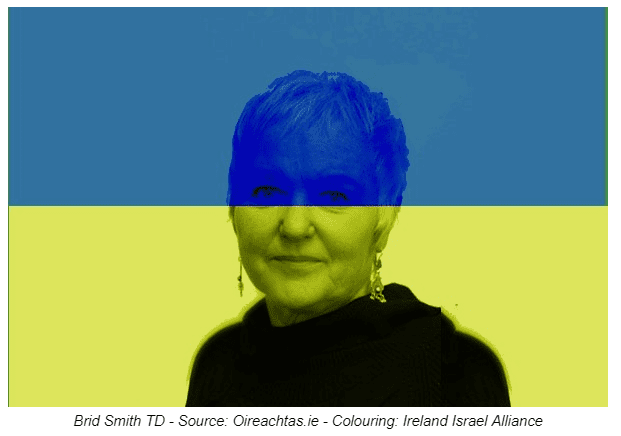 The interviewer didn’t challenge her on the point of “illegal settlements” but did interject asking, “But not against Russia because of the illegal war?” Smith got irritated at that point, clearly feeling that she was being interrupted unfairly. She went on to explain that in her view, sanctions work under certain circumstances. She said that Palestinians in Israel are calling for sanctions and the implication is that that is sufficient reason for her to support sanctions on Israel but not Russia.

There are two points on this. Firstly, does she know – as described here in Yoseph Haddad’s landmark speech to members of the Oireachtas in February – that the vast majority of Arabs in Israel have no sense of self-identification as Palestinans? Israeli Arabs include diplomats, ambassadors, news anchors, professional athletes, military leaders, successful singers, senior tech executives, bank CEOs, and supreme court judges. They are far too busy taking advantage of the opportunities that Israel offers them and using their undoubted talents to make the state an even better place to live in for all Israelis.

The second point is more implicit. The claim that Palestinians want sanctions against Israel is actually highly questionable. The Palestinian Authority doesn’t do open debates and is liable to imprison or even kill those who oppose it (3). Nor does it seem to like elections. Mahmoud Abbas is now in the 17th year of his five year team and there’s no sign of any desire on his part to test his mandate before the Palestinian people again. For the record, he has indicated opposition to boycotts of Israel (3) but it must be admitted that depending on the audience, he’s liable to express diametrically opposing positions on any issue on any given day.

So, if expressions (unverifiable, in democratic terms) of support by unidentified Palestinians for an anti-Israel boycott are sufficient for Brid Smith and colleagues, then surely a similar standard should apply for Ukrainains. Not so. She listened to the democratically elected president of Ukraine plead for more sanctions on Russia but far from supporting him, she is using that as an argument to oppose him! Zelenskyy became Ukrainian president in a fully democratic election only three years ago in 2019. She also can’t have missed the interviews with numerous other Ukrainians, from ministers of government, MPs, mayors – all democratically elected – and ordinary Ukrainians all calling for boycotts of Russia.

However, for Brid Smith and her cohorts, that counts for less than a vague idea of some unidentified and unidentifiable Palestinians calling for a similar boycott of Israel. And let us not forget that Russia’s attack on Ukraine was completely unprovoked while Israeli attacks on Gaza are only ever in response to missile attacks from Hamas and other Gazan militants.

Pleas from Ukrainian leaders from right across the democratic spectrum for boycotts of Russia are not just ignored but are cited as reasons to be less supportive of their cause. Meanwhile, far more questionable pleas from Palestinians for boycotts of Israel are unquestionable dogma. There’s not much about this stance that makes much sense – at least not to this writer. However, this article will be sent to Brid Smith on social media. Let’s see if she’s able to defend this singular obsession with Israel, and double standards with respect to Ukraine and so many other issues.