The Ireland Israel Alliance and its founder Jackie Goodall was recently profiled in Israeli newspaper Makor Rishon as one of a number of non-Jewish organisations/individuals supporting Israel around the world.

“Our biggest achievement to date has been to overthrow the Occupied Territories Bill” – Jackie Goodall, Founder and Executive Director of the Ireland Israel Alliance, who works around the clock to tell the Israeli story to the Irish people.

“Before my first visit, everything I knew about Israel was related to Christmas greeting cards with pictures of the Church of the Nativity or painings of biblical Hebrews living in a desert country.
Only then did I realise that Israel was in a continuous struggle for survival seven decades.
I was never interested in politics until I saw how biased the Irish media was  against Israel, which has influenced the reactions of politicians and the Irish public”

The Ireland Israel Alliance (IIA) was established in May 2018 as a non-profit organization based in Dublin, Ireland.
We are in contact with organisations from all backgrounds to promote the study of the truth about Israel, whether secular or religious organisations, and from all corners of the political spectrum.
At the same time, we are constantly in touch with the Government of Ireland, political parties,  organisations, schools, universities and educational establishments.

What are you doing?

Our biggest achievement to date has been to overthrow the Occupied Territories Bill that came up for discussion in 2018, which aims to boycott and even convict Irish companies that
“trade or financially support illegal settlements in territories that the international law defines as occupied”, when the goal was clearly to only damage to settlements in Judea and Samaria.
The penalties were fines of up to €250,000 and up to five years in prison. If this shameful law had been passed, Irish citizens would not have been allowed to purchase goods or services from Jewish businesses in certain areas of Jerusalem and even in Judea and Samaria.

How did you get involved in pro-Israel activities?

When I first visited Israel in 2003, I was amazed to see a modern, energetic, multi-ethnic country, and a real high-tech nation.
I was never interested in politics until the Israel-Gaza conflict of 2014. I saw how much bias there was in the Irish media against Israel, which has influenced the reactions of politicians and the Irish public.

My Christian faith, and my love for the Jewish people and their national homeland, made me even more involved, and so I founded the Ireland Israel Alliance (IIA).
The organisation is a miracle, because I never dreamed that we would be able to establish an organisation that would be able to be so involved politically and media-wise as we do today.
I do this full-time. It’s sometimes tiring but necessary.

A picture from one of the demonstrations we held outside the offices of the Irish government in Dublin, against the Bill whose purpose is to boycott Jewish products from Judea and Samaria.
The picture had the caption “Proud to be pro-Israel” and “Shabbat Shalom to all our friends and supporters in Israel, Ireland and around the world”.

Do you get negative reactions to your activities?

Sure, I get a lot of negative reactions, but a lot less than I got in the beginning.
There is a very popular Irish magazine that wrote about me in a really nasty way, they wrote that because I am a “Zionist Christian” I am not really a Christian.
In addition, about four months ago our website was downed, probably as a result of hackers’ activity from Iran.

Have you been back to Israel since your first visit?

I can’t even remember how many times I visited Israel. Last year alone I had five trips to Israel for work but also for holiday.

I absolutely love Israeli food, especially falafel and Hummus. I love walking the alleys of the Old City of Jerusalem, and I also have a warm place in my heart for Jaffa and the shores of the Mediterranean.
I love the Israeli people, and I have many friends that I visit during my visits. I visited Israel recently in January and I hope to visit again soon.
In the meantime, I am very happy with the progress of relations between Israel and the Arab countries, I hope and pray that the situation around COVID-19 will improve and it wil be possible to visit again.

Its digital platform is relatively new and still gaining momentum, but Jackie operates in one of the most challenging arenas for Israel in the EU, and despite this she has managed to build a warm home for Israel’s supporters in Ireland.
Jackie manages to bring a unique and rare pro-Israel voice, thanks to the messages and collaborations and the level of content she creates.
We always laugh that because she lives in a remote Irish village she is “disconnected” from the DIGITELL network. Hence the importance of this group – to be a home and a connection to the distant voices in the pro-Israeli world. 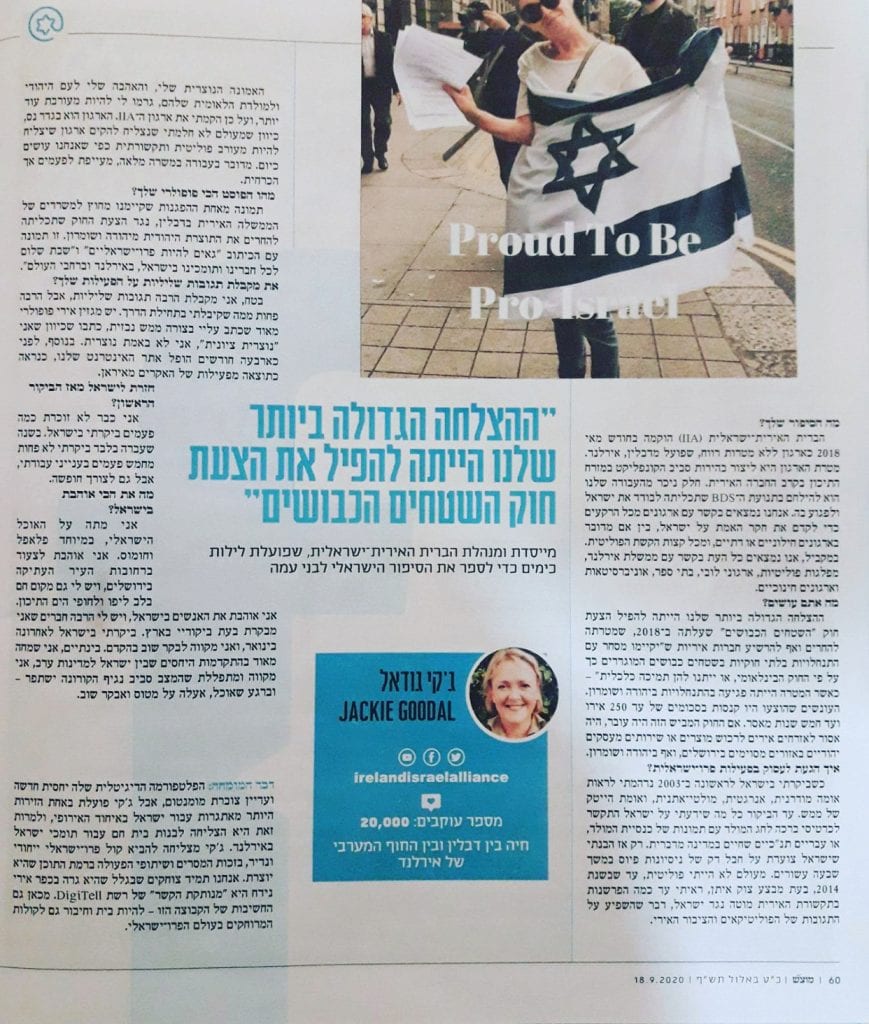