NGO Monitor has done an interesting study highlighting how Trócaire (an Irish charity focused on developing countries) is so obsessed with Israel.

You can read the full article here, and the graphic below – based on tweets during the last month – will give you a good idea of what the report shows. It is sufficient to say that Trócaire devotes far more time to Israel than any other country. 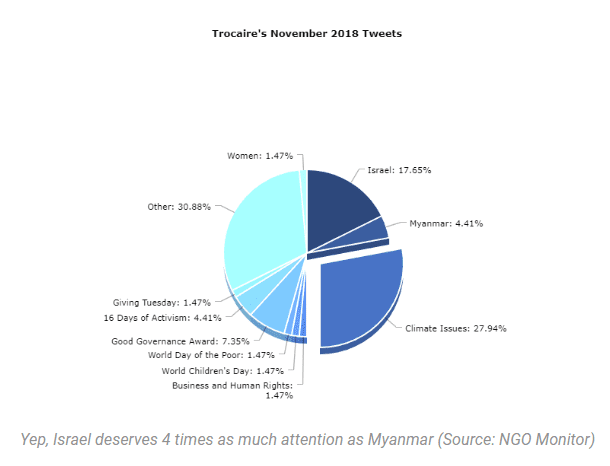 This will probably come as no surprise to readers of this blog and a Google search of the Trócaire website (carried out on 6/12/2018) reinforces the point. On Trócaire.org, Israel gets mentioned 193 times. Yemen – experiencing a horrific famine due to war involving Saudi Arabia and rebels backed by Iran – gets mentioned 62 times. Saudi Arabia – which also brutally murders journalists in its consulates – gets 26 mentions and Iran is referred to 39 times.

The unfortunate Rohingya who are being ethnically cleansed from their homes by the government of Myanmar come in for a mention 41 times on the Trócaire website. Hamas gets referred to only 6 times. It’s kind of hard to discuss the ongoing Gazan missile attacks on Israeli villages without mentioning Hamas but then Trócaire doesn’t seem to want to mention those attacks. As the NGO Monitor report points out:

“Trócaire’s tweets studiously omit mention of Hamas war crimes. Following an attack of 400 rockets and missiles from Gaza against Israeli population centers on November 13, causing one death and more than 70 injur[ies], the organization focused all of its attention on Gaza’s ‘humanitarian crisis.’”

Breaking news! Trócaire has a political agenda. So what? Some would accuse us of having one too. A lobby group has a right to present its own slant on events. The difference is that Trócaire receives extensive funding from the Irish government which is its largest single source of finance. British and Australian readers might like to know that their governments fund Trócaire too and finance is also obtained from the European Union and none of the taxpayers contributing have a say in this.

The people in Trócaire are not bad guys – at all. The charity does a huge amount of good in the world. However, of all the issues of our times, the Israel-Palestine issue has suffered more than any other from ill-informed outsiders steaming in with their simplistic and biased views. The refusal to acknowledge Israel’s side of the argument has a hugely negative effect and in the next funding round, it would do no harm at all if the Irish, UK and Australian governments were to impress upon Trócaire their responsibility to simply be more factual in their coverage of the challenges Israelis face. If you want our money, drop the bias. Simple.