International Holocaust Remembrance Day falls on January 27, the anniversary of the date of the liberation of Auschwitz-Birkenau concentration camp by the Allied Forces.

However, Israel and Jewish communities around the world commemorate the six millions Jews who perished in the Holocaust, and the heroism of survivors and rescuers, on Yom HaShoah, or to give it its full official title, Yom HaShoah ve-Hagevurah – the “Day of Remembrance of the Holocaust and the Heroism”. Choosing a suitable date was complicated: as the memorial day was partially inspired by the Warsaw Ghetto Uprising, that date was suggested but it clashed with Passover.

Meanwhile, some religious authorities preferred the 10 Tevet, the date on the Hebrew calendar that marks remembrance of the destruction of the First Temple by the Babylonians. In the end, the date chosen was 27 Nissan, a compromise date halfway between Passover and Yom Hazikaron, the memorial day for Israel’s soldiers lost in battle.

The main focus of Yom HaShoah is the memory of the Jews murdered during the Holocaust, but remembering those Jews who were able to fight back is also an important element.

Western historians tend to highlight the valiant efforts of the “Righteous amongst the Nations”, the Gentiles who helped to rescue Jews from Nazi persecution. However, Jews across Europe were involved in significant resistance and rescue efforts on their own behalf. Given the Nazi determination to annihilate the entire Jewish population of Europe, simply staying alive as a Jew became recognised as an act of resistance.

In Eastern Europe, much of the resistance was unarmed, simply because the German occupation was so swift and brutal that there was little if any opportunity for Jews to organise. In addition, for the first two years or so, the Jewish population was unaware that Nazi policy had developed from persecution and ghettoisation to mass murder, and so their efforts were concentrated on staying alive and on maintaining education and religious life in the face of Nazi prohibitions on school attendance and religious observation. Organising the smuggling of food so as to provide more than the legally rationed, unsurvivable, calorie intake (eg less than 400 calories per day in Warsaw) is just one example of unarmed resistance against the Nazi death program.

Probably the most famous act of Jewish resistance was the Warsaw Ghetto uprising, when Jewish prisoners attacked German tanks and, despite being vastly out-numbered and under-armed, continued attacks on the Germans for more than a month.

Other ghettos such as Vilnus and Bialystok, also saw uprisings and many young Jews escaped and joined partisan units to fight the Germans. Prisoners in Treblinka and Sobibor concentration camps rose up against their jailers; most of them died, but some escaped and survived the war. Auschwitz-Birkenau, the Sonderkommando mutinied against the SS guards, seriously damaging one of the crematoria and killing several guards. The prisoners who escaped were recaptured; they, and the Jewish women inmates who had helped them, were all executed.

Outside the ghettoes and camps, young Jewish men and women across Europe joined national resistance units or partisan groups, organised escape routes for Jewish children, and printed underground resistance newspapers and false identity papers. The 2008 film Defiance portrays the efforts of the Bielski brothers, joining a resistance group in the Belorussian forests and ultimately rescuing some 1,200 Jews. Primo Levi was part of an Italian resistance group when he was arrested and deported to Auschwitz.

Jews in France were involved in a wide array of resistance activities.

Many French Jews joined the de Gaulle’s Free French in London, while others joined French resistance groups, particularly in the “Vichy” southern zone. France had a large population of Jewish refugees from Eastern Europe; many were communist and had already fought against Franco in the Spanish Civil War.

Banding together in the communist resistance, they formed Jewish fighting units with Yiddish as their common language. The The Éclaireuses et Éclaireurs Israélites de France (EEIF, Jewish Guides and Scouts of France) became involved in both rescue and resistance movements. They rescued and hid Jewish children orphaned after the first roundup of Jews in Paris, provided Jews with false identity papers and smuggled Jews to Spain and Switzerland. Linking up with the Organisation Juive de Combat (Jewish Army), their partisan unit participated in the liberation of Castres. A number of other clandestine networks were run by Jewish women and were also involved in providing false papers, hiding Jewish children and smuggling Jews out of France. 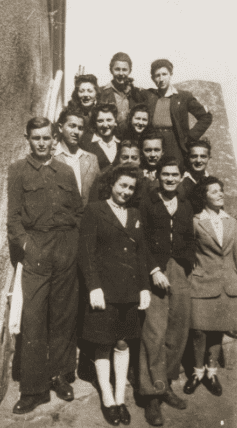 Leo Bretholz is pictured in the second row from the front at the left, wearing a white shirt.

Formed by Robert Gamzon, leader of the Jewish scouting movement, Eclaireurs Israelites de France (EIF), “La Sixieme” sought to provide documentation and hiding places for Jewish children and to smuggle them over the borders into Spain and Switzerland.

1Jewish Resistance and Passivity in the Face of the Holocaust YEHUDA BAUER in Unanswered Questions: Nazi Germany and the Genocide of the Jews, ed Francois Furet, New York, Shocken Books.