The Silence is Deafening: Where Are The Environmentalists and Animal Rights Activists?

It has been a summer of wildfires.

Brush fires in Hawaii have burned 13,000 acres.  Fires in California have burned a total of almost 480,000 acres, destroying 1,800 homes and killing at least 8 people.  In Greece, 88 people were killed and 1,500 houses destroyed by fire – the death toll particularly high because the fires happened in areas of high population density. As temperatures rise globally and changing weather patterns cause drought, wildfires are becoming more deadly. Arson is suspected to be an element in all of these cases.

In one small corner of the world, in a country that measures just under 520,000 acres, or slightly larger than Leinster, arson attacks have been a feature of daily life for the last three months.  Since June, hundreds of incendiary devices have landed in private gardens, nursery schools, fields waiting to be harvested and national parks and reserves. The incendiary devices have been delivered by balloons and condoms filled with helium appropriated from medical supplies, by kites and in two known cases, by being attached to falcons.  They come with messages: kites daubed with swastikas or carrying threats of a “scorching summer”, party balloons with pictures on them, perhaps designed to attract and injure small children.

Through a combination of luck and vigilance, there have been no fatalities, but over 7,000 acres of land, a third of it in national parks and nature reserves, have been burned.  Along with wheat fields, the environmental disaster includes the destruction of bee hives, cedar and avocado groves, farm animals and wildlife. Bedouin communities have lost pastures and food supplies for their sheep and goats.  To this damage we can add the air pollution from weekly tyre fires just over the Gaza border, creating a toxic mix of air-borne carcinogens.

It might easier to visualize these areas by reference to known quantities: 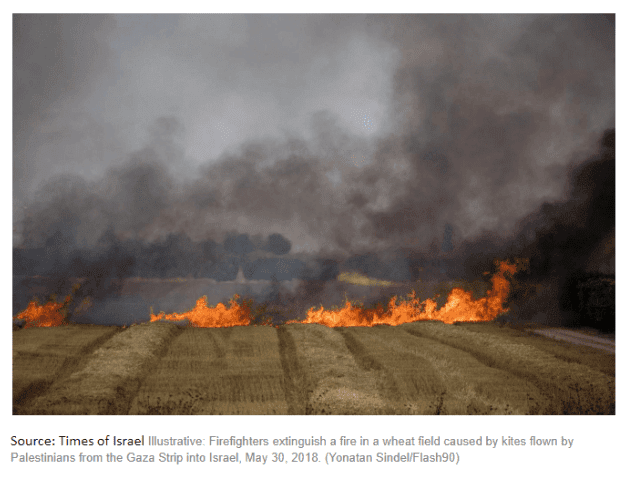 This is life in southern Israel, where fire bombs and flaming kites launched by Hamas terrorists based in Gaza are carried by hot Mediterranean breezes.

During the day, the residents cope with fire and smoke. At night they are awakened by sirens warning them of rocket attacks – militants in Gaza have fired hundreds of rockets at civilian locations in Israel this summer, only failing to do serious damage because of Israel’s defensive Iron Dome system.  Kite and balloon attacks continued this week even after a ceasefire was announced. 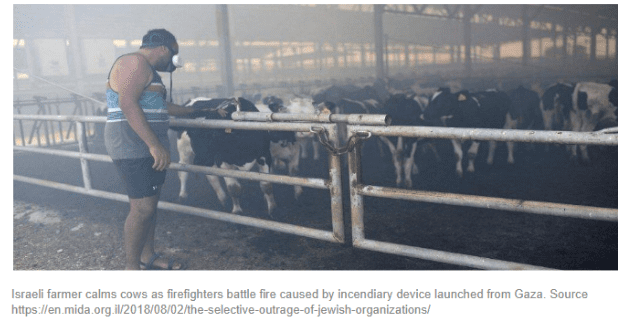 The Irish coverage of these fire attacks has been muted at best.

Pro-Palestine activists have minimized or even praised the attacks, often deleting provocative social media comments after a few days.  One Dublin politician referred to “peaceful” balloons in a now deleted tweet, while a retired university lecturer posted on Facebook, and later deleted, “Blessed be the fire kites, balloons and condoms”.  The national broadcaster RTE prefers to report on Israel’s halting of fuel supplies to Gaza, in a bid to reduce the attacks, rather than on the arson attacks ravaging the land. 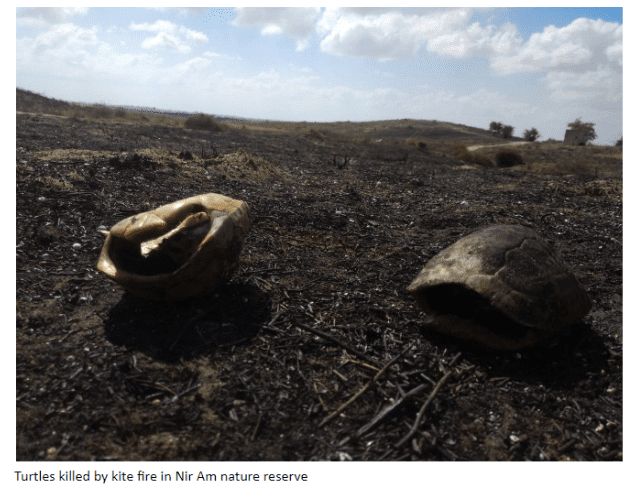 It seems these attacks are ignored or even justified because no Israeli has died – an unfavourable comparison with deaths in Gaza.  Is this really our measure of justice? Where are the environmental crusaders, the Green Party, the animal rights activists, to decry these attacks on the natural world? Must someone die before we care? How many deaths is enough to satisfy your sense of justice?