The Anti-Israel Lobby – now doing the work of hate groups

Mike Godwin was far ahead of his time when he promulgated Godwin’s Law. For those not in the know, it states that “As an online discussion grows longer, the probability of a comparison involving Hitler approaches 100% [i.e. certainty]”. However, even Godwin – clever though he is – didn’t reckon with the activities of Israel-hating groups and individuals. They can be guaranteed to introduce Nazi-related terms right from the word “go”.

So Gaza is apparently a “concentration camp”.  The Israelis allegedly treat Arabs like “untermenschen” and operate a policy of “lebensraum” in Gaza, Judea and Samaria. Israeli retaliation against attacks from Gaza supposedly amount to “blitzkrieg” or even “genocide”.There’s so much more but you get the picture.

A leading BDS activist in Manchester outside an Israeli-owned cosmetics store (Source: The New Anti-Semite)

There is indeed poverty in Gaza but several indicators such as life expectancy, infant mortality, and maternal mortality compare favourably with many if not most Middle Eastern states so conditions are pretty typical for Arab countries. If Gaza is a “concentration camp”, what does that make its neighbours?

And really, given how Gaza’s population will jump by 50% in the next 17 years, how can anyone make the comparison considering that in the original concentration camps, six million Jews were murdered or starved to death in about 2 years? Those hurling the accusation ignore how Israel provides Gaza with supplies (even when Gazans are attacking Israel – but not when Hamas refuses the Israeli aid), water and electricity (when Hamas isn’t bombing the power lines) while it’s Egypt that imposes a full blockade. 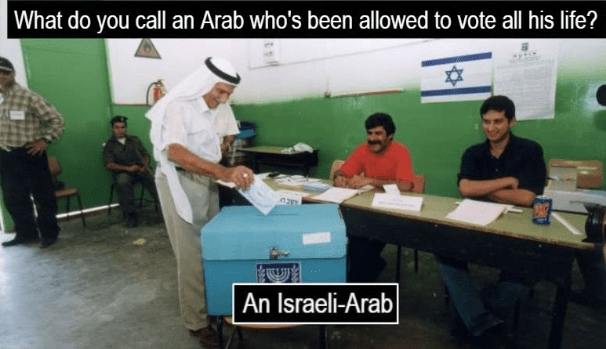 As regards the “untermenschen” tag, Israel affords its Arab citizens a standard of living other Arabs can only dream of – with the exception of those Gulf states that have oceans of oil to sustain their economies. Meanwhile, the only ethnic Arabs in the Middle East who can claim to have lived in a fully democratic state for the last seven decades are those lucky enough to live in Israel.

Those who think that Israel is implementing a policy of “lebensraum” in Gaza need to start watching the news again because the Israelis left thirteen years ago. In fairness, the South African government seems rather confused about that too so they’re not alone. The Israelis still do have a presence in the West Bank but it’s difficult to see how they can hand over strategic territory overlooking major Israeli cities to a hostile, Jew-hating regime such as Fatah. Trust must be earned but Fatah is more interested in promoting and rewarding the killing of Jews.

Military experts have repeatedly praised the restraint shown by the IDF in recent interventions in Gaza so to liken it to blitzkrieg (a policy of complete destruction of urban areas by the Nazis such as that carried out in the Basque city of Guernica) amounts to nothing more than ridiculous hyperbole.

Except that there is more than ridiculous hyperbole going on here. Outside of the Arab and Islamic world, Holocaust denial has no credibility and is illegal in many countries. Meanwhile, the hate groups have not gone away; yet they find themselves presented with the widespread acknowledgment that the Holocaust did happen. So what can they do?

If there’s no traction any more in pretending that the Holocaust didn’t occur, the next best thing is to minimize it, sanitize it, take the terms most associated with it and render them effectively meaningless. Anywhere outside the developed world can – however ridiculously – be referred to as a “concentration camp”, and any military response can be wildly exaggerated as “blitzkrieg”. And, of course, the point of using the Israeli-Palestinian conflict as the vehicle for this sanitization is that an ancient hatred can be sustained, albeit in a cleverer, less obvious form.

In the past it came from the right. Now, it’s coming mainly from the anti-Israel lobbyists of various hues. Some are just too ill-informed to understand how they’re being used but they can’t all be. They know they’re doing the work of hate groups and are quite happy with that fact.