Last November the online booking platform Airbnb announced that it would remove listings of properties in Israeli communities in Judea-Samaria (the ‘West Bank’). It seemed like the NGOs involved in the BDS (boycott, divestment and sanctions) campaign against Israel had won a major victory. A month later, contradictory statements emerged from the company stating, then denying, that it had suspended this policy. The position remains unclear at this time. In the meantime, it’s worth noting that the company is happy to continue with its listings in other disputed territories, for example, northern Cyprus (occupied by the Turkish military and populated with large numbers of settlers from mainland Turkey since 1974) and Tibet (similarly, by China, since 1959).

Who put the pressure on Airbnb? It may or may not be coincidental that, at the time of its original announcement, the NGO Amnesty International was preparing its latest report (‘Memorandum to Israeli Authorities: The Tourism Industry and Israeli Settlements’) published on 11 January, in which it slams not only Airbnb but TripAdvisor and, to a lesser extent, Booking.com, Expedia and Hotels.com. These it blames for legitimizing what it calls “illegal” Israeli settlements as well as “contributing to their economic prosperity and therefore to their consolidation and expansion”.

The report begins with a gross error in its estimate of the area of “the land controlled by settlers”. It claims that this amounts to 53,000 hectares, equivalent to 40 per cent of the total West Bank area. In fact, 53,000 hectares, assuming it is accurate, is 530 square km which equals 9 per cent of the total West Bank area of 5,878 square km. In Area C, the part of Judea-Samaria where the Jewish communities are located and which, by agreement under the 1995 Oslo Accords, remains under sole Israeli control pending a final status agreement, this represents 15 per cent. Yet the report claims that “In Area C… Israel has allocated 70% of the land to settlements and only 1% to Palestinians”. It fails to mention that over 96 per cent of Palestinians live in Areas A and B under the autonomous rule of the Palestinian Authority.

But the figure of 530 square km or 9 per cent is itself misleading: it exaggerates the area covered by the buildings of the settlements. Aerial photographs have shown this to be 1.5 -1.8per cent of total West Bank area. The rest is infrastructure – roads etc. – and administrative zones surrounding the settlements. 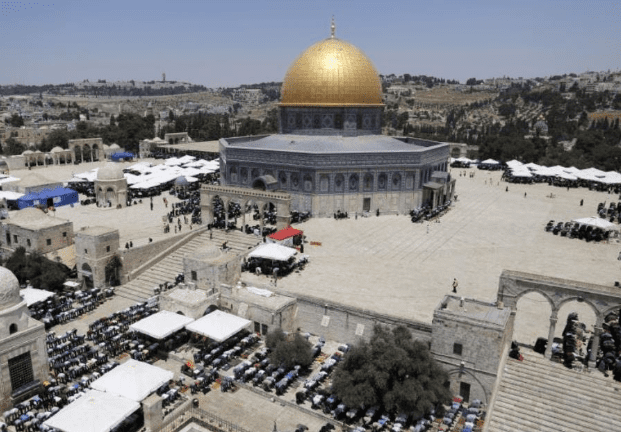 Jerusalem’s Temple Mount: Only since the onset of Israeli rule in 1967 have followers of all three monotheistic faiths had unfettered access to their sacred sites.

It has been a key part of Palestinian Arab propaganda to spread this false data of “40 per cent of the West Bank” in order to create the impression that, if a two-state solution is ever to become a reality, the space for a potential future Palestinian state is shrinking rapidly due to Israeli settlement construction. Anti-Israel groups have been hammering home this message for the best part of twenty years and it has gained a firm foothold in the mainstream media and in European governments. Ignoring the fact that terrorism, or what is called the “resistance”, long predates the first West Bank settlement, and ignoring too the multiple rejected offers by Israeli governments of almost the whole of Judea-Samaria in exchange for a lasting peace, such exaggeration fuels the mistaken idea that the chief responsibility for the lack of peace lies with Israel and that only it has the power to unlock the impasse in the peace process.

In fact, the real cause of the lack of progress is the failure of the Palestinian Arab leadership to encourage its people to accept that Israel is there to stay. If that leadership were to radically change course and open the way to peace and Palestinian statehood, the infrastructure created around the settlements would be a positive benefit to the new state, just like those other legacies of the Israeli “occupation” since 1967, the rise in Arab life expectancy from 48 to 74, or the fall in infant mortality from 60 to 15.4 per 1,000 births, or the increase in the number of universities from one to seven.

Returning to Area C, the report claims that “since 1967, Israel has constructed tens of thousands of homes on Palestinian land to accommodate settlers”. This is a statement designed to mislead. It is clear that the land in question is not privately-owned land belonging to Palestinian individuals, but is ‘Palestinian’ only in the senses that (i) it once formed part of the British-ruled Palestine Mandate and (ii) might in the future, given a peace agreement, form part of a first-ever state of ‘Palestine’. In the meantime its status is that formerly called ‘Mawat’ under Ottoman rule – largely unclaimed and uncultivated land making up about two-thirds of the total – and now inherited as state land by Israel.

The first part of the report contains a mixed bag of allegations offered as evidence for the claim that “Israel’s settlement policy is one of the main driving forces behind the mass human rights violations resulting from the occupation.” These allegations concern “trigger-happy army and police”, “arbitrary” detention, restrictions on freedom of movement and prosecutions of Palestinian children in juvenile military courts. No details are given that might be refuted, and neither is any context given for these phenomena; there is no mention of the 2000-05 Second Intifada that left 1,200 Israelis dead in terror attacks, most emanating from the West Bank, or the recent wave of stabbings and car/truck rammings that have added to the terror toll, or the stone-throwing youths – technically ‘children’ – who have been responsible for the deaths of car drivers and passengers. “Settler-only roads” are mentioned without reference to the Arab-only roads on which Israelis are forbidden to travel in Areas A and B.

Further allegations, and criticism of the online booking companies, come in the second part, which consists of five “case studies” – on (1) Kfar Adumim—Khan Al-Ahmar Bedouin village, (2) Shiloh – Qaryut & Jalud, (3) Susya—Khirbet Susiya, (4) City of David – Silwan and (5) Hebron. The information given here on the development of tourism infrastructure assumes a hostile tone throughout, as if Jews had no right to any presence at all in Judea-Samaria, their ancestral heartland, and as if Israel had no right to build anything in Jerusalem, the historic Jewish capital. For example, the City of David site, just south of the Old City, is called “a settler-managed archaeological site.”

Amnesty’s notion of “illegality” is based on one interpretation of Article 49 of the 4th Geneva Convention (1949) which it treats as if it were the last word of international law on this matter. It ignores completely the prior enactments of international law that gave Jews the right to live everywhere “between the river and the sea”: the 1922 League of Nations Mandate and its incorporation into Article 80 of the UN Charter, provisions that have never been revoked.

A frequent theme here is that Israel is using these sites to “rewrite history”, using archeological sites in or near the settlements to highlight episodes of Jewish history, thereby emphasising the Jewish people’s roots in the area at the expense of the more recent history of Arab communities there. Of the new museum at Shiloh, Amnesty claims that it “highlights the belief that several important Biblical episodes took place at the location. By contrast, Amnesty International researchers noted that the museum and the film downplay or ignore the most significant ruins at the site – two mosques and a Byzantine church. The presence – for centuries – of Arabs on the land is ignored.” At the City of David site, it notes that “EU Heads of Mission… noted how Israel used archaeological and tourist sites, such as the City of David, ‘as a political tool to modify the historical narrative and to support, legitimise and expand settlements.’”

There is something nausea-inducing in the thought of diplomats from EU states, few of which, to say the least, covered themselves in glory over the centuries in their treatment of their Jewish minorities – from the 20th century alone, it is enough to mention Drancy (France), Westerbork (Netherlands), Mechelen (Belgium), Paneriai (Lithuania) and the long roll-call of German death camps – coming to Jerusalem to lecture Jews on their historical narrative and on where they may live.

Still, there might be substance in the criticism of rewriting history, if it were not so one-sided, i.e. if Amnesty had ever criticised the total denial of Jewish roots in all of the region by Arab spokespersons. Take the example of Jerusalem’s Al-Aqsa Mosque which stands on the Jewish Temple Mount. Last week the Jordanian Minister for Religious Endowments warned Israel’s government over the increased number of “raids by occupation forces and settlers” on the Mosque. He cited a number of 30,000 such “raids” in 2018. That’s an average of 96 “raids” every day. Apparently he was referring to the Jews who visit the Temple Mount, people who file quietly up simply to see the most sacred spot in Judaism (Israeli policy forbids them to pray or worship). The Palestinian media routinely refer to these visits as the “storming” of the Mosque.

It is not difficult to find the moral high ground in all this. During the 19 years of Jordanian Muslim control of Jerusalem’s holy sites, and following the Jordanian army’s expulsion of all Jews from the Old City, Jews were forbidden to worship at the Western Wall, and Christians often found access to the Church of the Holy Sepulchre difficult. Only since the onset of Israeli rule in 1967 have followers of all three monotheistic faiths had unfettered access to their sacred sites. So who is trying to bury whose history here?

Regarding Jerusalem, allegations include the charge that houses inhabited by Palestinians in the city have been confiscated “to allocate them to settlers”. But this can only refer to a small number of cases in which Jews have sought to reclaim properties lost when the Jewish population was ethnically cleansed by the Jordanian army in 1948. These cases were long and difficult; some ended in the Supreme Court. They do not add up to a policy of confiscation.

Nowhere is the biased nature of this report clearer than in its treatment of Hebron. This it calls “one of the historic flashpoints of the Israeli-Palestinian conflict”. It mentions the 1994 massacre of 29 and wounding of 125 Arab worshippers by Israeli Jew Baruch Goldstein at the nearby Cave of the Patriarchs, an atrocity condemned throughout Israeli society, but says nothing of the 1929 massacre of 67 members of Hebron’s Jewish community, an event that brought its 800-year-old presence there to an end. In fact, to read the report, one would imagine that the Jewish presence there is entirely alien. 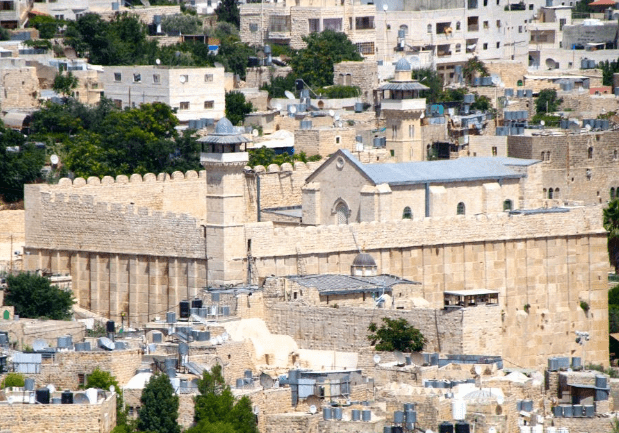 Nowhere is the biased nature of Amnesty’s report clearer than in its treatment of Hebron (Source: www.jpost.com).

It decries the “incredibly tight restrictions” on the Palestinian Arabs living in H2, the old part of the city where the 800-strong Jewish minority lives, though it has just admitted that the soldiers and police are “deployed to protect the settlers.” It blames the tensions between the two communities and attendant “human rights violations” – which apparently consist entirely of attacks by settlers on innocent Palestinians – on “Israel’s policy of establishing illegal colonies in the midst of Palestinian communities”. This is interesting, and raises the question of what a correct Israeli policy might look like.

When it allows Jews to settle apart from Arabs, it is accused of ‘apartheid’, but here it’s clear that they should not be planted “in the midst of” Arabs either! Damned if you do and damned if you don’t. It seems that only a Judenrein West Bank policy will do!

It is very likely that at least some of these Jewish residents would be prepared in principle to accept citizenship in a future Palestinian state as the price of living in Judaism’s second holiest city. In that event, the question is: would they be safe without the presence of Israeli troops to protect them? It seems not – and neither would their right to live there be defended by the likes of Amnesty International.