Deputy Charlie Flanagan opened by welcoming the Ambassador, acknowledging that the meeting was taking place on “this important feast and holiday of Hannukah” and wished the Jewish community in Ireland and worldwide an enjoyable and peaceful holiday.

The Ambassador thanked the Deputy for his warm Hanukkah greetings and for the invitation from the Chair and Committee members to speak on the Israeli perspective currently facing the Middle East – both threats and opportunities.

The Jewish festival of Hanukkah celebrates the successful rebellion of the Jewish people against the Seleucid Empire that ruled the region from 312 BC to 63 BC and the subsequent rededication of the Jewish Temple on Jerusalem’s Temple Mount, which, as the Ambassador noted, marked “the opening of yet another chapter of Jewish sovereignty in what is now the modern State of Israel, with Jerusalem as its capital”. The context of this important Jewish festival highlights the direct continuity of the Jewish people in the Land of Israel going back some 3,000 years, and is well documented within Biblical, archeological and historical sources.

The Ambassador’s comments then focused on the strategic paradigm shift currently taking place within the Middle East in light of the Abraham Accords, as witnessed by a growing number of Arab states “recognising that Israel is not an enemy, but rather a valuable partner for prosperity and a strategic ally in dealing with common challenges”. He also noted the importance of recognising that these developments do not come at the expense of the Palestinian issue, rather they “provide an opportunity for the renewal of the peace process in a more supportive environment”. 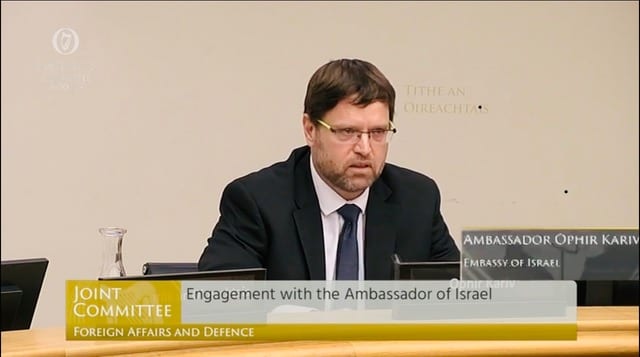 Ambassador Kariv also spoke about the Iranian threat to Israel and the wider region, together with its proxies in Lebanon, Gaza, Yemen and elsewhere, as well as Hezbollah in Lebanon and the importance of declaring it a terrorist organisation in its entirety – as has a total of some nineteen countries including Israel, the US, the UK and Germany. Hezbollah is also considered a terrorist organisation by the Arab League.

Sinn Féin TD John Brady was first to ask questions, at which point he removed his chequered face mask, complete with Palestinian flag in the upper left-hand corner. It appears Covid-19 has provided Sinn Féin a unique opportunity to fly their preferred flag of choice on a continuous basis, as we noted Mary Lou McDonald wore an identical mask at a Dáil sitting earlier in the week. You would have thought that out of common courtesy to a foreign diplomat, Deputy Brady might have chosen a plain mask on this particular occasion. Alas, no! 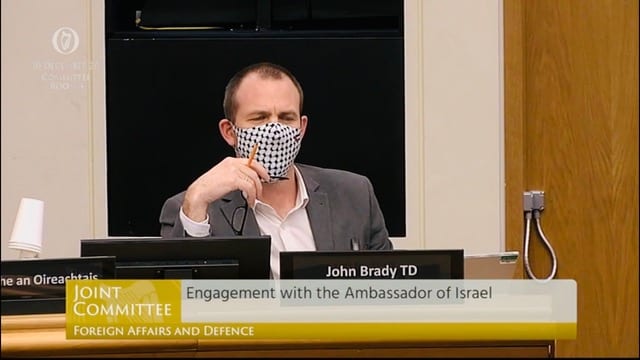 Deputy Brady spoke for a full seven minutes on what he referred to as the “ramping up” of “illegal Jewish settlers” in the West Bank, the “1967 recognised borders set by the UN”, the “cleansing” of the Palestinian people since 1947 and the “collective punishment of the people of Gaza”. When interrupted by the Chair to keep to questions, Deputy Brady concluded by asking the Ambassador whether he can “justify the abuse of minors” in Israeli detention.

The Ambassador reminded him (or perhaps Deputy Brady genuinely didn’t know because he has never bothered to find out) that the “border” to which he referred is not, and never was, a border, rather it is an armistice line drawn as a political compromise following the attack by five Arab armies on the nascent Jewish State the day after Israel declared its independence in 1948, and that it is in this light that the settlements must be addressed, by political compromise between Israel and the Palestinian leadership. 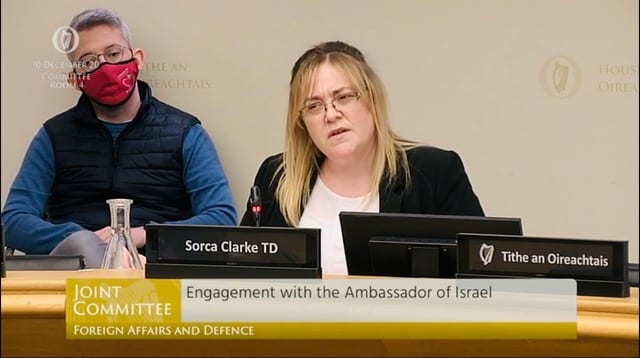 The other Sinn Féin TD who spoke was Sorca Clarke, who bizarrely questioned the Ambassador on issues relating to internal Israeli policies. She advised the Ambassador that she, and all members of the Committee, were provided with a comprehensive Israel information pack prior to the meeting. One particular part of the material had “caught her eye” – it seems that somewhere within the pack it stated that although Israel is “a highly developed and technologically advanced economy”, “wages are very low” and the Israeli “education system hasn’t been very well invested in over the last number of years”. For reasons best known to herself, Deputy Clarke appeared highly disturbed at this, finding it “perplexing”. She asked the Ambassador if this was accurate, advising him she had no issue with providing him with the evidence gleaned from the information pack. The real perplexing issue here is Deputy Clarke’s own perplexity. What can she have been thinking?

Deputies Brady and Clarke both admitted it was the first time they had met the Israeli Ambassador. If Sinn Féin genuinely sought to understand the true history of the region and its complex geo-political issues instead of acting as the purveyors of Palestinian propaganda, they might – just might – start to be taken seriously as genuine partners for peace. As the Ambassador rightly observed, “Talk to us, not about us”.

When Senator Diarmuid Wilson briefly referred to the recent rise in antisemitism within Europe and asked the Ambassador whether he viewed criticism of Israeli policies as antisemitic in light of some of the comments made, Deputy Brady loudly interjected, saying the Senator’s question was “shocking”. He later took to Twitter to call Senator Wilson’s perfectly valid question “absolutely outrageous”. 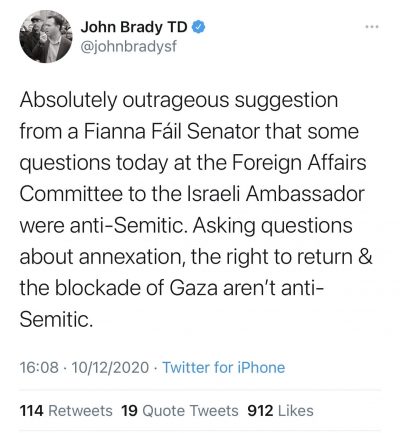 The full video can be viewed here starting at 1:19 minutes.

Due to Covid-19 time restrictions and the overrunning of the session, Ambassador Kariv was invited back to address the Committee in the Spring of 2021.