Many were shocked when US Congresswoman Rashida Tlaib said she “loves the fact” that her “Palestinian ancestors” were part of an attempt “to create a safe haven for Jews” after the Holocaust [Recording of her interview – Holocaust remarks at 28:00].

Where did she pick up such a false record of history? She’s probably influenced by a myth which is widely disseminated by pro-Palestinian propagandists on social media.

“When the Jews entered in #Palestine as Refugees with no clothes and no shoes. Today they claim Palestine belongs to them. Fact: Jews were kicked out of every country in Europe and Palestine was the only country to help and support helpless Jews”. 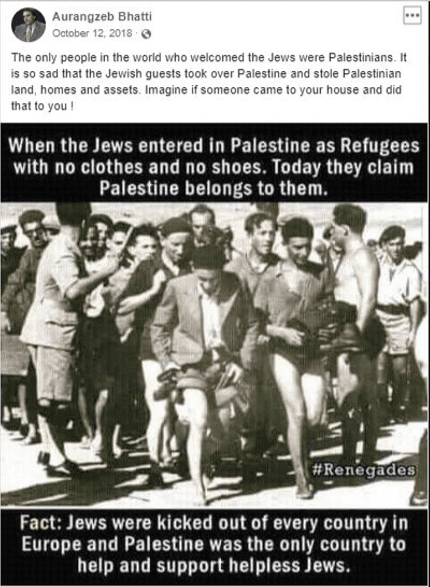 Propaganda claiming that Palestinian Arabs helped and supported Jewish refugees during WW2.
This post was shared 9100 times on Facebook.

BDS propagandists love spreading the false story that goes along these lines:

“Palestinian Arabs welcomed Jewish World War II refugees into their land while the rest of the world shunned them. But those Jews took advantage of their hospitality and took over Palestine.”

This is a popular theme in Arab, Muslim and BDS circles, is being shared thousands of times on social media, and seems to be influencing members of the US Congress so it deserves debunking.

Propaganda full of falsehood that distorts history is dangerous, especially on social media.

It’s our duty to correct and debunk these lies.

(This article was originally published at “Jews Down Under“.)