On this day 80 years ago, in a dramatic escalation of World War Two, Nazi Germany invaded the Soviet Union, ending the two-year Non-Aggression Pact between the two totalitarian states. An army of more than three million men, supplemented with divisions sent by allies Finland and Romania, crossed the line dividing German-occupied from Soviet-occupied Poland and pushed east at great speed, sending the Soviet army into retreat.

Already, since the Nazi invasion of 1939, the Jewish communities of western Poland had been herded with great brutality into almost 100 ghettos, the largest being those in Warsaw and Łodz. Large-scale mass killings were rare as yet, but the enforcement of Jewish slave labour combined with the shortage of food and the grossly overcrowded conditions in the ghettos produced a very high death rate.

That changed on 22 June 1941. For the almost seven million Jews of Poland, the western Soviet Union (Russia, Belarus, Ukraine), Romania and the Baltic states, the Nazi invasion spelt utter catastrophe and ushered in the climax of the Holocaust. 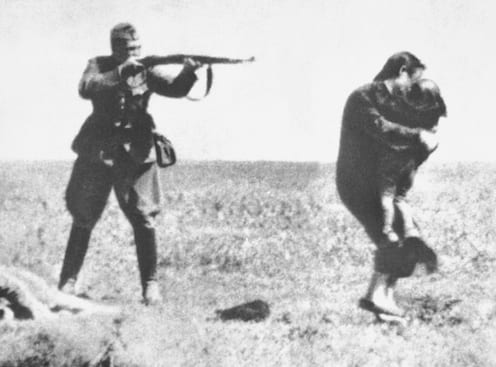 Hitler had long made clear his intentions with regard to the Jewish people. In a speech at the Reichstag on 30 January 1939 (as he secretly planned the invasion of Czechoslovakia for six weeks later) he said: ‘Today I will once more be a prophet: if the international Jewish financiers in and outside Europe should succeed in plunging the nations once more into a world war, then the result will not be… the victory of Jewry, but the annihilation of the Jewish race in Europe!’

In June 1941, Hitler’s immediate concern was not with Jewish financiers, but with Jewish communists. The goal of Operation Barbarossa was to take over vast territories as Lebensraum for the German ‘race’, reducing the local populations to slave status. As previously in western Poland, this entailed the liquidation of the intelligentsia and all those in social and political leadership positions.

In the Soviet Union, local Communist Party officials were at the top of the target list. Since Hitler had long been convinced that Bolshevism was essentially a Jewish project, and Jews were in fact often heavily represented in communist ranks, the policy of killing communists dovetailed with that of annihilating the Jews.

Four specially trained SS mobile killing squads totalling about 4,000 men, the Einsatzgruppen, followed the advancing army with the mission to execute on the spot all in the above categories. They spread out along parallel eastward routes stretching from the Baltic in the north to the Black Sea in the south. Very soon, entire  Jewish communities were subjected to mass shootings and burnings. The army’s advance was so fast that less than 300,000 Jews were able to escape to safety beyond the Volga.

Within a month of the invasion, 5,000 men, women and children of the Jewish population of Vilna, Poland (now Vilnius, Lithuania) were marched out of the city to the nearby forest of Ponary, to be lined up by turn on the rims of large pits in the forest left behind by the fleeing Soviets, and shot by the Einsatzgruppen and local collaborators (another 19,000 would be murdered there in the autumn). 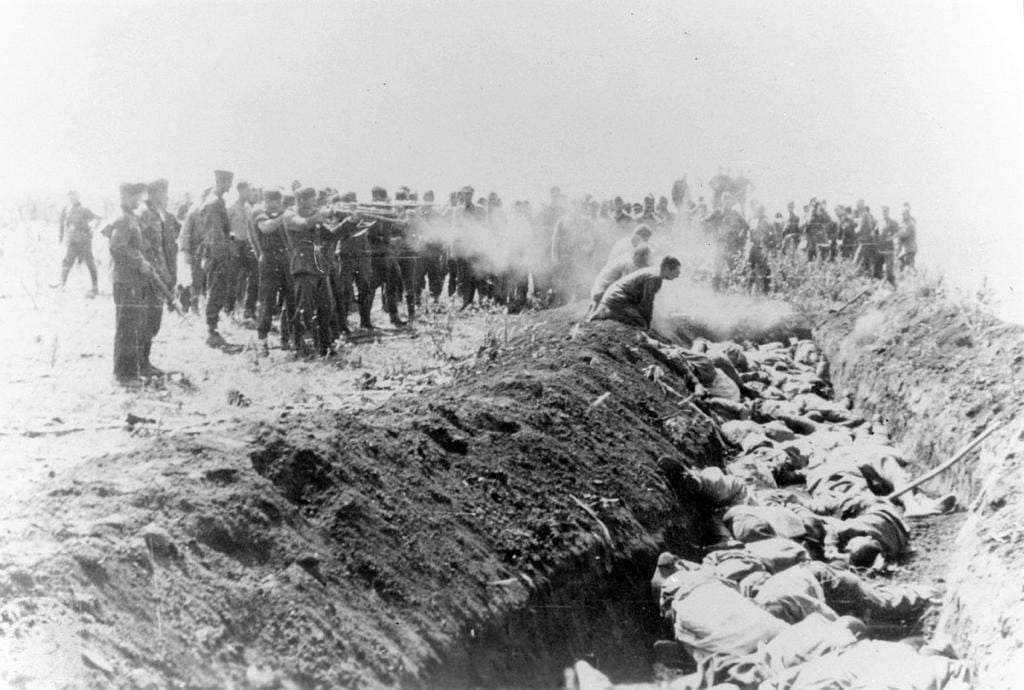 Massacres on a similar scale took place at Bialystok, Brest-Litovsk, Minsk and dozens of other towns. As the weeks went by, the scale increased. Among the larger Einsatzgruppen shooting massacres in 1941 were: 33,771 Jews of Kiev shot into a ravine at Babi Yar; 20,000 Jews killed at Kharkiv, Ukraine; 36,000 Jews machine-gunned at Odessa, Ukraine; 25,000 Jews at Rumbula forest near Riga, Latvia. Historian Raul Hilberg estimates that 1.3 million of the 6,000,000 Jews murdered during the Holocaust were killed by Einsatzgruppen (along with hundreds of thousands of Poles, Russians, Roma and other nationalities).

By late 1941, the pace of killing was judged too slow for the size of the target populations, and the method too stressful for the shooters. The Wannsee Conference was convened in January 1942 to explore more efficient means of genocide with a view to the ‘final solution of the Jewish problem’.

The outcome was the building of dedicated death factories in eastern Poland at Belzec, Sobibor, Treblinka and Majdanek, where Jews deported from ghettos were murdered by the thousand immediately on arrival in gas chambers using lethal exhaust gases from internal combustion engines. Intelligence reports indicated that more than 1.27 million men, women and children died in this way within a year of Wannsee.

The killing method was further refined with the use of Zyklon B gas pellets when extermination facilities were added to the concentration camp at Auschwitz, where almost one million Jews perished.

Many questions are still unanswered in relation to the unfathomable evil let loose in eastern Europe by Operation Barbarossa. Two chief questions are: (1) to what extent did local populations in Lithuania, Latvia, Poland, Slovakia, Hungary, Ukraine and Romania welcome Nazi killers and collaborate with them in the mass slaughter of Jews – and what was the ratio of such collaborators to saviours of Jews? (2) to what extent had decades of local antisemitism in these countries driven Jewish people to throw their lot in with the Soviet communists, in turn creating popular anger that identified Jews with Soviet oppressors? The answers are complex: research findings vary greatly from place to place.

The Jewish populations of eastern Europe were completely unprepared for the Nazi onslaught. Lithuanian and Polish Jews in particular had learned to expect evil things to come from the east, never from the west. Political Zionism was weak in these communities.

One thing is certain: if ever a nation’s historical experience spoke of the urgent need to have a state of its own, it was the defenceless position in which the diasporic Jewish populations of eastern Europe found themselves in June 1941.

Martin Gilbert, The Routledge Atlas of the Holocaust (3rd edition, 2002).

Raul Hilberg, The Destruction of the European Jews (1985).

Jan Gross, Neighbours: The Destruction of the Jewish Community in Jedwabne, Poland (2000)