The Control of Economic Activity (Occupied Territories) Bill, which was launched by Independent Irish Senator Frances Black in January 2018, returned to the Seanad (Irish Senate) last Wednesday night where it passed Committee stage. It will be presented for its final Report stage on Wednesday 5th December before it goes before Dáil Éireann (Irish Parliament), where its legality will be debated.

Following our protest outside Leinster House on Wednesday night we received a barrage of anti-Semitic hate-mail, similar to the kind we received when we staged a similar public demonstration of the Bill when it passed its first stage back in July.

In response, the IIA has written a strongly worded letter to all members of the Seanad, the text of which is below.

Meanwhile, Senator Ned O’Sullivan has now taken on the brief of Fianna Fail Senate Spokesperson for Foreign Affairs. In his speech on Wednesday night, he commented that he has been inundated with support for the Palestinian side but that he had received “almost nothing” from Israel supporters. He is very open to hearing Israel’s side and we would urge you therefore to write to him at: ned.osullivan@oireachtas.ie

Here is a copy of the letter the IIA has sent out to ALL the Senators:

The IIA has written to all members of the Seanad to let you know of our horror and disgust at the outpouring of online hate since the “Occupied Territories” Bill was introduced earlier this year, and which is increasing in intensity as the Bill moves through the Seanad. We believe this hatred is a direct result of the public defamation of Israel and Israelis in parish halls, community centres and hotel rooms around the country, in what can only be described as a thinly veiled attempt to depict the Jewish State as a murderous, apartheid regime which deserves to be stripped of its dignity. Below is a fraction of the type of abuse we, an Irish pro-Israel group receive: 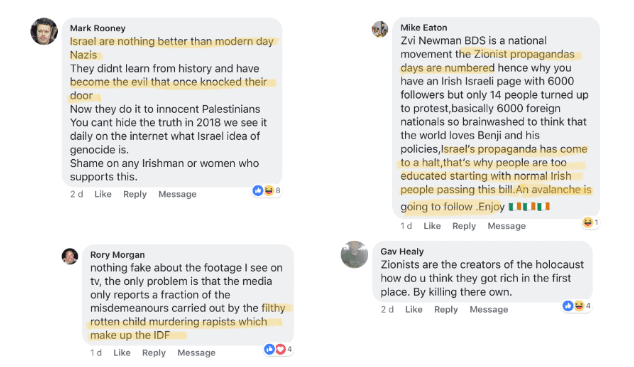 Symptomatic of the hateful narrative which has entered the Irish psyche was the appalling broadcast aired on RTÉ’s Claire Byrne Live Show on October 8, where former Irish broadcaster Mike Murphy, in calling for a State boycott of the 2019 Eurovision in Tel Aviv, made numerous references to the Holocaust, claiming that “the abused have become the abuser”. He then went on to make the outrageous assertion that Israel would “propagandise” the Eurovision – similar to what the Nazis did at the 1936 Berlin Olympics. When hateful speech such as this comes directly from our veteran broadcasters and elected officials, is it any wonder we see such online displays?

Senator Black repeatedly states that the Bill applies to “occupations and breaches of international law anywhere in the world if there is evidence and legal consensus”. This is patently hypocritical, as the Bill is worded in a manner that targets only Israel and ignores other disputed territories:

> Armenia occupies the enclave of Nagorno-Karabakh and 7 surrouding districts, all recognised internationally de jure as part of Azerbaijan, since 1994.

> Russia occupies Abkhazia and South Ossetia since 2008, territories which are internationally recognised de jure as part of Georgia, since 2008.

> Russia occupies parts of what was formerly accepted as Ukranian territory: since 2014 it recognises the breakaway People’s Republics of Donetsk and Luhansk in south-eastern Ukraine and it annexed Crimea the same year after a plebiscite of its population.

Furthermore, according to Ireland’s Attorney General and the EU Commissioner, this Bill would be in breach of EU law.  This shows that the Bill, if passed, is likely to result in long drawn out legal battles; expensive, time consuming and unhelpful to the Israel-Palestine peace process.The Bill could also be contrary to numerous US trade laws. Twenty-six US states currently have stringent anti-boycott legislation.

The Bill could also cause job losses to at least 10,000 Palestinians in businesses that provide better pay and conditions than are available anywhere else in the West Bank. These businesses provide an almost unique opportunity for Israelis and Palestinians to work together, fostering mutual understanding and furthering the possibility of peaceful coexistence.

The BIll will also polarise communities, discourage grass roots dialogue and trust building and remove Ireland as a contributor to the peace process.

Senator Ned O’Sullivan said that he heard “almost nothing” from the Israel side and that Israel has “a problem with PR”, yet as soon as those who stand with Israel open their mouths they are accused of being “Zionist shills” and “paid Hasbara trolls”. Senator O’Sullivan is correct in his assertion that something is amiss here. In earlier correspondence submitted to the Oireachtas and to elected Councillors, a number of officials unsubscribed from our emails, with one particular Councillor opining “Hitler would be proud of you.”

As this shameful Bill, which solely targets the Jewish State moves to Report stage next week, let me assure you that all of Ireland does NOT support the demonisation of Israel and the hateful BDS movement which Frances Black and Sinn Fein openly support, and whose founders openly call for the destruction of the state of Israel. Listen to what the founder of the BDS movement has to say:

What a shameful indictment on our country, that in the progressive Ireland of 2018 of which we are so proud, many Israel supporters prefer to stay quietly out of the limelight out of fear of reprisals, and how tragic it is that the ages-old scourge of anti-Semitism is rearing its ugly head once again. Criticism of Israel is not anti-Semitic, but to single Israel out for demonisation most certainly is.

I would urge all of you who voted against this Bill to stand firm in your resolve and ask those who voted in favour, to now reject this immoral, discriminatory and illegal Bill.

I would be more than happy to speak with you in person.