No Place for Violence in the Democratic Process

There is no place for violence or threat of violence in the democratic political process.

The Green Party Manifesto for the 2020 General Election campaign was titled “Towards 2030 – A Decade of Change”. Primarily concerned with creating a “Green New Deal” aimed at trying to “make your world a bit better, a bit kinder and a bit greener”, its foreign policy chapter contains a section titled “Ireland’s Neutrality, Peace and Globalisation”. There, tagged on to paragraphs emphasising Ireland’s neutrality and discussing international trade policies, is the following:

“We support an immediate recognition of the State of Palestine and an end to arms trading with Israel, a ban on settlement goods, an end to the use of military detention for children and an end to the blockade and closure of Gaza.”

No other conflict or human rights issue is mentioned in the Green Party manifesto. There is nothing on Syria, Yemen, Rohingya or Uighurs. The “ban on settlement goods” is referred to only in the context of Israel-Palestine, with no mention of other occupied territories around the world. The only country named in the Green Party’s foreign policy is Israel.

Following initial correspondence with a number of politicians expressing opposition to the Occupied Territories Bill, below is a critique of the Green Party’s other policies on Israel and Palestine, based on a lightly edited version of a letter sent by one of our supporters to Eamon Ryan, the current leader of the Green Party.

The blockade on Gaza is operated by both Israel and Egypt. It does not in fact prevent the delivery of tons of food, medical supplies and other equipment. It is intended to prevent terrorist organisations in Gaza from obtaining weapons.

There are many terror groups in Gaza, amongst them Hamas paramilitaries, Palestinian Islamic Jihad and the Al Aqsa Martyrs Brigade. All are sworn to destroy Israel, and all are funded by Iran, also sworn to the destruction of Israel. Just this week, Ayatollah Khomeini, the Supreme Leader of Iran has promised to support “any nation or group” that fights the “Zionist regime”.

Despite the blockade, militants in Gaza have been able to fire thousands of rockets at Israel. This article gives an outline of the nature of the weapons Hamas has accumulated. The number of people killed by these rockets is relatively low thanks to Israel’s Iron Dome defence system; however their psychological effects on civilians in Israel, especially children, has been significant.  For example, in the city of Sderot, regularly targeted by rockets and explosive balloons launched from Gaza, some 70% of children suffer from PTSD.

Now imagine what horror these Iran-backed terror groups could unleash on Israel if there were no blockade. 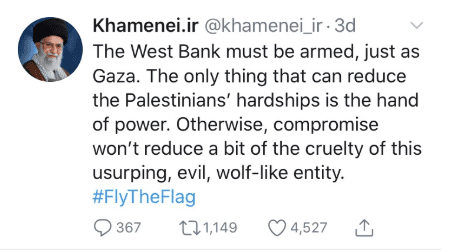 An arms embargo on Israel

As already described, Israel is targeted by multiple Iran-backed terror groups in Gaza. Iran also funds Hezbollah, which has bases in Lebanon.  In addition, Israel is threatened by Hezbollah and other groups operating in Syria and by ISIS groups operating in the Sinai region of Egypt. Please see this report published by the United States Department of State which discusses terror threats to Israel.

In these circumstances an arms embargo on Israel would be utterly irresponsible.  Teamed with the Green Party demand to remove the blockade of Gaza, such a policy asks that Israel be made vulnerable to attacks from well financed terror groups on all sides. 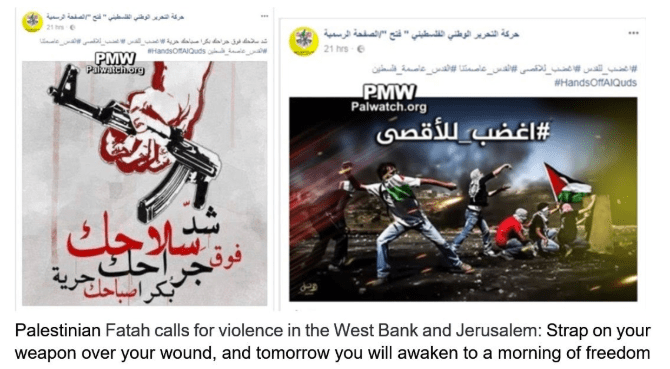 The recognition of a State of Palestine is an aspiration that should not come without conditions. In Northern Ireland the Good Friday Agreement was predicated on the use of “exclusively democratic and peaceful means of resolving differences on issues”, and included the decommissioning of terrorist weapons. No less demand should be made of the many terror groups based in Gaza and Judea & Samaria/the West Bank before recognising a State in Palestine.

Palestinian leaders in Judea & Samaria/the West Bank and Gaza have proven themselves unable to organise elections, at least partially because of in-fighting between Hamas and the Palestinian Authority. The last time they prepared for municipal elections, female candidates’ names were censored completely or  advertised as “wife of…” or “sister of…” Basic democratic systems should be demanded before statehood is considered.

The Palestinian Authority operates a “Pay for Slay” program of rewarding Palestinians who attack, kill and injure Jewish Israelis. The latest available figures indicate that approximately $350 million per annum is paid in monthly stipends to the perpetrators (or their families) of attacks on Israelis.  This is not a social welfare system. This is an incentive to murder, with the payments often higher that the average Palestinian wage. No one should be considering statehood for Palestine until this payment system is stopped. As the Green Party 2020 manifesto says, “There is no place for violence or threat of violence in the democratic political process.”

Western leaders really need to examine the question of whether the Palestinian leadership is ready for peace and statehood. Recent evidence would suggest it is not. In Gaza several weeks ago, six peace activists were arrested by Hamas for participating in a Zoom conversation with Israelis. Their leader Rami Aman has not been seen since. Link to video of Gaza peace activists Zoom conversation https://www.youtube.com/watch?v=cdDimj0NR88

Just this week, the Palestinian Authority rejected a plane-load of medical supplies from the United Arab Emirates because they were delivered via Israel in a manner judged to be “normalisation” with Israel.

Of course it would be preferable to deal with children via civilian courts instead of the military court system in Judea & Samaria/the West Bank. However, there are important caveats.

First,  the system of military law applied in the West Bank is the result of arrangements made under the Fourth Geneva Convention and the Oslo Accords. Of course, under the Oslo agreements Israel was to gradually withdraw troops based on an expected continuation of negotiations on the final status issues (borders, settlements, etc) but the First Intifada broke out, and no progress has since been made.

Now Israel has announced its intention to implement Israeli law in parts of Area C; this would result in Palestinian residents of those areas being dealt with in civilian courts. The European Union has classed the move (incorrectly) as “annexation” and threatened dire consequences should Israel proceed.

Second, it should be clarified that the children that have been detained are all over 12 years old.  The age of criminal responsibility in Israel (under both civil and military law) is 12 years old – as it is in Ireland. The vast majority of minors detained by Israeli security forces are aged 16-18.

The resolution of this issue is dependent on Israel and the Palestinian Authority getting involved in negotiations to settle the final status issues as outlined the Oslo Accords.

The Green Party positions on Gaza, arms trade with Israel and Palestinian statehood laid out in the Party Manifesto are at best naive. They would reward the Palestinian leadership with a State without first requiring them to commit to living peacefully beside Israel, while opening the door for Iran to arm the numerous terrorist groups determined to attack Israel. They demand everything of Israel and nothing of the Palestinians, not even a commitment to peace.