If Chile had done as much for peace with its neighbours as Israel has, there would now be completely normal relations between Santiago de Chile and La Paz.

Michelle Bachelet, the newish United Nations High Commissioner for Human Rights (she was appointed late last year) is clearly no friend of Israel. The former Chilean president made her pro-Palestinian sympathies plain long before she took up her role, likening her political exile in Europe under the dictatorship of Pinochet to the situation of Palestinians unable to return to Israel after Israel’s war of independence.

She has described the Israeli presence in east Jerusalem as “illegal” and while she was president in 2017, her Foreign Affairs Ministry described as “unacceptable” the decision of the Israeli government to bar entry to a Chilean pro-BDS activist. Meanwhile, in 2014, her government recalled its ambassador from Israel in protest at an Israeli incursion into Gaza in response to months of missile attacks by Gazan militants on villages in southern Israel. 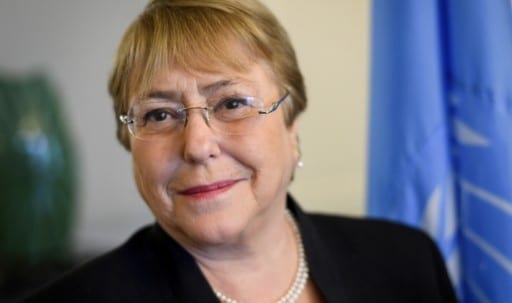 So, it should have been no surprise to anyone when she started to use her new role to resume criticism of the Jewish State. In February of this year, the UN condemned Israel following violent riots by Gazans at the Israeli border in 2018, saying that the Israeli military’s response might have been “crimes against humanity”. When Jerusalem condemned the report for its bias, Bachelet criticized this response, claiming that it didn’t “[address] any of the serious issues raised.”

More recently, Ms. Bachelet’s office has claimed that Israeli soldiers wilfully killed “peaceful” Gazans during those protests. And in the last few days of October, she intervened quite firmly in German domestic politics with regard to a vote by the Bundestag in May declaring the anti-Israeli BDS (Boycott Divestment Sanctions) movement to be antisemitic. Her comments don’t seem to have attracted much attention in the international English language media but she has effectively given the German government 60 days to explain the legal consequences of the vote. The Germans must also explain how BDS activists can highlight human rights issues “without unlawful restrictions.”

Of course, she’s perfectly free to compare her political exile in Europe under the dictatorship of Augusto Pinochet to Palestinians unable to go back to Israel after that country’s war of independence in the late 1940s. However, to the knowledge of this writer, she has expressed no similar sentiments about the nearly one million Jewish refugees – members of communities whose histories go back well over 2,000 years – who were forced to leave Arab and Islamic countries across North Africa and the Middle East. She seems to have no interest in their right of return.

Meanwhile, under her presidency, her government seemed to operate to similar double standards. Even while they sharply condemned Jerusalem for barring a Chilean pro-BDS activist, they were themselves banning the Bolivian Defense Minister, Reymi Ferreira from Chilean territory for referring to the Chilean government and president in “injurious” terms and for calling on people to boycott Chilean products. Yep, Chileans can ban people who call for a boycott of their country but Israelis can’t! It should also be mentioned that Senor Ferreira denied the Chilean allegations that he had called for a boycott.

The UN report on the Gaza border violence that she defended made no recognition of the dilemmas faced by Israeli soldiers, vastly outnumbered by up to 15,000 protesters who were rioting and hurling explosives, grenades and Molotov cocktails at Israeli troops while others were trying to breach the fence to attack Israeli villages which in some cases were only a couple of hundred meters away.

Has she ever condemned Hamas for encouraging the protests? No. On the contrary, she persistently sides with the Gazan regime, ignoring their abuses and corruption and blaming Israel for the economic situation in the Strip, prompting Hillel Neuer of United Nations Watch to write her this excoriating open letter on social media.

As regards her demands that Germany – after the May vote in the Bundestag – explain how BDSers will be allowed to continue to highlight human rights issues without unlawful restrictions, – well! – those poor oppressed BDSers could start by behaving like other campaigners. They can still campaign without vandalizing supermarkets that sell Jewish or Israeli products, or without being openly antisemitic, or without assaulting people that dare to not submit to their demands, or without roaring, shouting and disrupting appearances by artists and academics just because they’re Israelis, or without issuing death threats to young female singers.

The BDS movement is one of the nastiest global political movements of our times. Hatred lies at its heart and it is driven by hatred of Israelis (and in more than a few cases, Jews), not love of Palestinians. Ms. Bachelet’s very own organization, the United Nations recently published an unprecedented report (unprecedented for the UN) which links the BDS movement with antisemitism. Perhaps she might address this instead of lecturing German lawmakers.

Readers might be puzzled by the earlier reference to the controversy about the Bolivian defense minister being banned by Ms. Bachelet’s administration two and a half years ago. Surely, two left-leaning, Spanish-speaking Latin American governments that share a border should have excellent diplomatic relations.

Well, they actually don’t have any diplomatic relations at all, not since 1978 when Bolivia severed them.  There is no Bolivian ambassador in Santiago de Chile and no Chilean ambassador in La Paz. The poor relations stem from the War of the Pacific between 1879 and 1883 during which Bolivia lost its Pacific coastal territories and became a landlocked country. It not only lost access to its coastline but also to the vast mining resources of those regions which now enrich the economy of the Republic of Chile.

Bolivia is the poorest country in Latin America while Chile is the richest, with a GDP per capita three and a half times higher. The Bolivians claim that the loss of those territories is costing it 1.5 percentage points of economic growth per annum and might argue that Chile’s wealth stems from the resource rich regions annexed from Bolivia. Chile’s national treasury grew by 900 percent between 1879 and 1902 because of the nitrates, saltpeter, and copper deposits mined from those regions. Of course, there are differing interpretations on both sides of the border and Chileans point to Bolivian violations of agreements that led to the war and a 1904 treaty in which – an albeit weakened and helpless – Bolivia accepted the loss of all its Pacific territories. The Bolivians insist today that that treaty was imposed at the barrel of a gun. 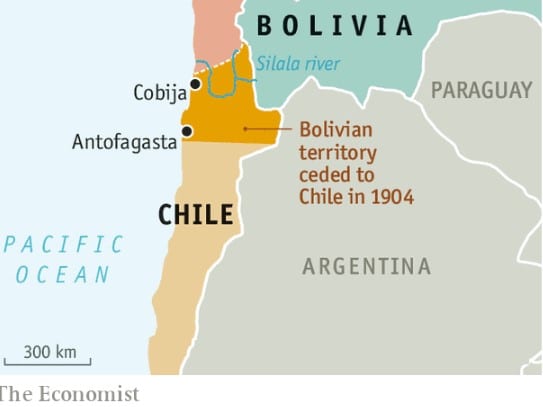 Chile also has a territorial dispute with Peru that arose as a result of the same war. The point of all this is that Chile has its own border issues with neighbours. That’s before we get into the question that the vast majority of Chileans are of European ethnic origin and hence, have no historical ties to the land of Chile.

In fairness to Chileans, they have made efforts to mend fences with their neighbours to the north east, but have they done as much as Israel? No, not even close. The Bolivian president, Evo Morales, has recently claimed that in 1975, Chile secretly offered Bolivia a 10km corridor that would grant the landlocked country access to the Pacific. Chile didn’t directly respond to Senor Morales’s claims, preferring to simply refer back to the 1904 treaty. Michelle Bachelet has declared that her country is always open to dialogue with Bolivia but crucially, the Chileans will not give up one square centimetre of the land they conquered over 100 years ago.

By contrast, Israel has offered territorial concessions on numerous occasions such as in 1967, 2000 and 2008. The one in 1967 was withdrawn due to the Arab League’s flat rejection of everything: no peace or negotiations with Israel, no recognition of Israel. The latter two failed because Palestinian leaders rejected them. What’s more, Israel has vacated territories such as the Gaza Strip and the Sinai Peninsula which it took in 1967, not to mention areas of the West Bank it has handed to the Palestinian Authority.

Israel has done much more in 50 years to achieve a final agreement than Chile has in nearly 150 years and if Chile had been as generous as Israel, there would now be completely normal relations between Santiago de Chile and La Paz. Rather than persistently lambasting Jerusalem, Ms. Bachelet could perhaps learn from its efforts to achieve peace with its neighbours.