Maybe they went too quietly

Maybe they should have protested or resisted. Maybe they should have defined themselves as victims and refugees, even unto the third and fourth generation. Maybe they should have seized cruise ships and aeroplanes and engaged in acts of terrorism. Maybe their leaders should now be offering pay-for-slay style financial incentives to engage in terrorist murders. Maybe the state that gave them a home should have put them in squalid refugee camps, holding up their condition as an affront to the world to be used in perpetuity against the countries from which they fled.

Maybe if all these things had happened, maybe if they and their leaders had made and continue to make the same choices as Palestinian and other Arab leaders, then their story would be more than a mere footnote in history. After all, the flight of nearly one million refugees from communities that had a presence in their countries of birth since time immemorial was one of the greatest population movements of the mid-twentieth century – greater than the number of Arabs and/or Muslims who fled the newly created State of Israel.

November 30th is the Day to Mark the Departure and Expulsion of Jews from Arab Countries and Iran (Hebrew: יום לציון היציאה והגירוש של היהודים מארצות ערב ומאירא), commemorated every year since 2014 so that the world will not be allowed to forget the fate of over 800,000 Jewish refugees forced to flee over a dozen Islamic countries in the Middle East and North Africa between the 1940s and 1970s.

The need for such a day stems from the unfortunate fact that few people know the story. It has been forgotten because all attention has been directed towards Palestinian refugees and because unlike the Palestinians, the Jewish refugees settled down (mainly) in Israel, and refused to embrace victimhood.

Aida Phelops, who lives in west Cork and describes herself as an “Irish Iraqi Jew” relates her and her family’s story in a recent interview with the Irish Catholic newspaper. It’s a story of anti-Jewish violence and massacre, increasing discrimination and persecution, passport seizure and revocation of citizenship, with Iraqi Jews coming under more and more suspicion of being spies for Israel – 13 of them being hanged for this on trumped up charges while Baghdadis were invited to come and celebrate the gruesome spectacle. As conditions worsened, Iraqi Jews took whatever chances they could to escape, having to leave much wealth and property behind. 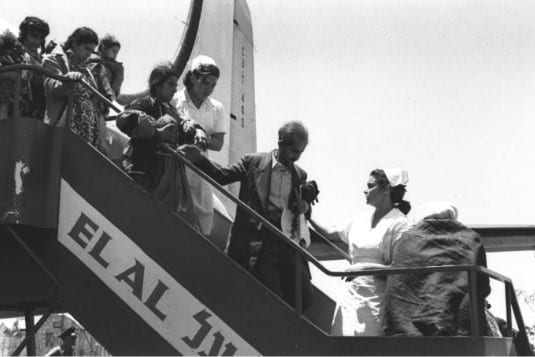 An injustice does not become less of an injustice because the victim tries to move on from it or chooses not to speak about it because they simply can’t. However, far too often, the world expects victims to continue to behave like victims if the wrongs done to them are to be recognized. Jewish refugees from Islamic countries and their descendants – living in and participating in the wealthy democracy that is Israel – don’t fit that bill so the world no more than glances over their tale before looking elsewhere.

This pertains despite the fact that their numbers were greater than those involved in the universally recognized Palestinian refugee story. It also pertains despite the fact that the communities forced to flee had histories stretching back well over two millennia; their claims to being indigenous to their countries are irrefutable. There were Jews in Iraq, Syria, Egypt and other Middle Eastern and North African countries one thousand years before a word of Arabic was heard there.

Contrast that with Palestinians whose claims to being indigenous to the Land of Israel is rather more uncertain. It’s for another blog article to deal with but books such as “From Time Immemorial” by Joan Peters present compelling evidence that many people who call themselves Palestinian are descendants of immigrants who moved from surrounding countries less than a few decades before Israel attained its freedom.

We hear much about the Palestinians’ right of “return” to the State of Israel but who speaks of the right of Jewish refugees to return to the countries from which they were forced to leave? Who even speaks of their right to compensation for the wealth and property that was seized from them?

Maybe – in comparison to Palestinians – they did go too quietly. Had they done what Palestinians and their leaders have done, perhaps their fate would have been acknowledged more around the world. However, has the perpetual embrace of victimhood and violence really benefited any Palestinian apart from a few corrupt leaders? Indulging in the what-might-have-been is rather pointless, especially at this remove, but in whatever way you can, this November 30th, remember the Jewish refugees from Arab and Islamic countries before their story is lost to history. Forever.