Readers may recall the case of Elor Azaria, an Israeli soldier who was sent to prison for shooting a knife-wielding Palestinian terrorist in Hebron in March 2016 after the terrorist had stabbed another soldier. His case did provoke much controversy in Israel with many people rallying to his support.

In one such rally in Tel Aviv in October 2016, some hardline elements were clearly present with one woman holding a banner with the words “Too many terrorists in prison” written on one side and “Kill them all” on the other. However, as described in the above link, the banner was removed by the organizers.

This is all well reported in the public media but that didn’t stop the Mint News website from engaging in quite shocking misrepresentation of the rally, claiming that it was calling for “Palestinian genocide” and giving high prominence to the above banner, with the clear implication that “Kill them all” referred to Palestinians.

Twenty-one months later, this nonsensical article is still there but would have been relegated well down the search engine lists by now. However, step forward Irish Times journalist Kitty Holland who decided that this fake news needed to be stirred up all over again, tweeting a link to the story on July 8th. 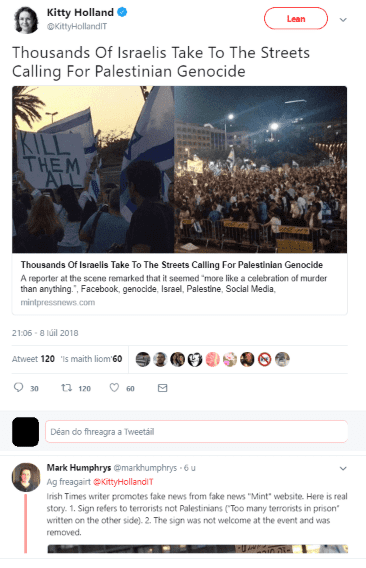 Numerous people indicated to her that the article was complete nonsense but all to no avail. Eventually, the folks at Honest Reporting covered the story and that might have been the reason why she quietly deleted the tweet. But few people notice when a tweet has been deleted and the damage had already been done. Kitty Holland’s 14,500 followers had been fed an anti-Israeli lie with no subsequent admission from her that it was a lie.

That, ladies and gentlemen, is what we have come to expect from the Irish Times, Ireland’s self-styled “newspaper of record”. Bear it in mind next time you come across one of their anti-Israel diatribes.