In all of the wars forced on Israel, the country has stood alone against its enemies. In all, that is, except one. The exception was the 9-day Second Arab-Israeli War of 1956, also known in Israel as the Sinai-Suez War and in the Arab world as the Tripartite Aggression. In the crisis precipitating it, the interests of eight-year-old independent Israel coincided briefly with those of two imperial powers, Great Britain and France, both allies of the United States, both engaged in Cold War rivalry with the Soviet Union.

In 1956, Egypt was ruled by its militantly pan-Arabist dictator General Gamel Nasser. Since the early 1950s, it had violated the terms of the 1949 armistice agreement by closing the Straits of Tiran to Israeli shipping, thus preventing exit from the port of Eilat and the Gulf of Aqaba to the Red Sea and the Indian Ocean. On the other side of the Sinai peninsula, it prevented Israeli ships from using the Suez Canal, the main conduit for oil supplies from the Gulf to western Europe.

Egypt had actively sponsored many of the infiltrations by Arab ‘fedayeen’ terrorists from the Egypt-occupied Gaza Strip to attack civilian centres and military installations in southern Israel. Other fedayeen crossed from Jordan. Israeli prime minister David Ben-Gurion told the UN in late 1956: “Israel has suffered nearly 2,500 casualties in killed and wounded as a result of attacks by her Arab neighbours since the 1949 armistice was signed. Since the beginning of this year the killed and wounded number 590…” Severe Israeli reprisals had not stopped these raids.

To cap all this, in autumn 1955 Nasser concluded a deal with the Soviet Union in which it received unprecedently large quantities of warplanes, tanks, warships, submarines and guns. Nasser’s prestige among the Arab masses soared as he threatened Israel (population 1.7 million against Egypt’s 24 million) with annihilation. The efforts of Ben-Gurion and his foreign minister, Golda Meir, to alert the western allies to the seriousness of the threat met with apathy: Secretary of State Dulles said Israel should rely on ‘collective security’ and the UN. Its requests to buy arms from Washington were being long-fingered monthly.

In March 1956, Ben-Gurion warned of war within a few months. For Israel, it was not a question of if, but when – when would conditions be most favourable? That summer, an opportunity presented itself.

Responding to Egypt’s growing closeness with the USSR, the US and Great Britain decided not to proceed with their promised financing of the Aswan High Dam on the Upper Nile. An angry Nasser retaliated on 26 July by seizing the Canal and nationalising the Suez Canal Company, owned primarily by British and French shareholders. Egypt was now embroiled with the great powers, who feared the Canal would be closed to western shipping. The allies became friendlier to Israel: France began to sell it weaponry, also motivated by its grudge against Egypt for supplying aid to Algerian rebels.

Faced with a choice between availing of the opportunity of British-French support (and Soviet preoccupation with an anti-communist revolt in Hungary that began on 23 October) or waiting for a well-armed Egypt-Syria-Jordan coalition under Nasser’s leadership to choose its moment of attack, Ben-Gurion decided to strike.

(As in 1948, the Fianna Fáil party of De Valera was out of power in 1956, replaced by the second inter-party government of Fine Gael, Labour and others. The Irish Press was a mouthpiece of the former; the Irish Independent supported the government. The Irish Times coverage was not examined for this study.)

Throughout the month of October 1956, the Irish Press daily reported the build-up of Middle East tensions. Israel stated it would boycott future meetings of the UN truce supervision agency, alleging that it had failed in its responsibility to maintain peace along the Israel-Jordan border. Jordan complained to the UN over a new attack by the IDF which had penetrated ten miles into Jordan-occupied Samaria (now the “West Bank”) to attack British-trained and -officered Arab Legion forces at Qalqilya, leaving more than 100 troops dead on both sides in the biggest battle since 1949. 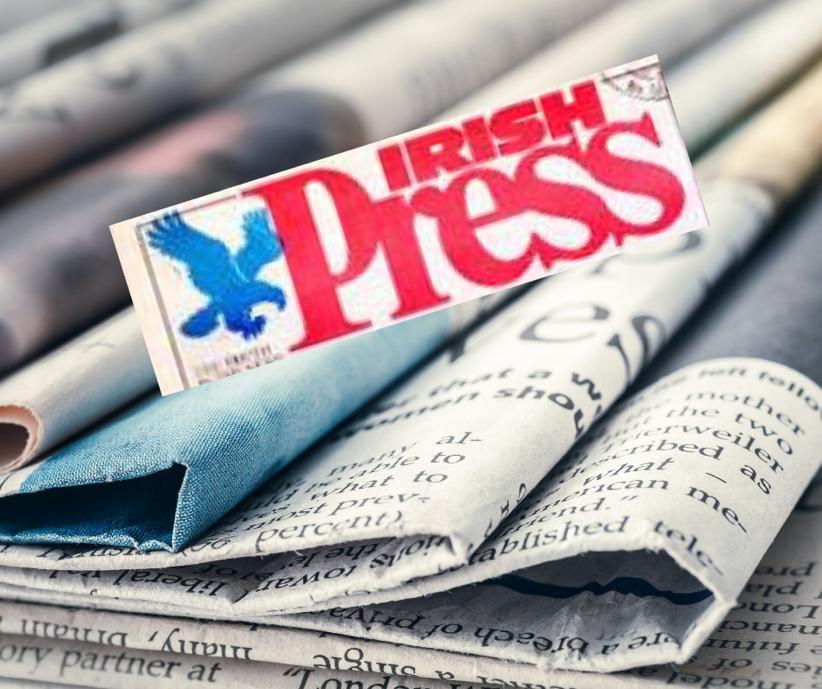 The Independent’s news coverage was more patchy than that of the Press but the paper did not hesitate to make its views known. In an 18 October editorial ‘Peril in the Middle East’, it refused to accept Israel’s reason for its incursions into Jordanian territory – it was clear that “unless Israel abandons the idea of forays beyond her own borders, whatever pretext may be advanced for them, she runs the risk of starting a clash that might have immeasurably disastrous results”.

Finally, on 30 October, all papers reported that Israel had invaded Egypt – ten brigades of the IDF had advanced through Sinai to within 18 miles of Suez on a 28-mile front.

The Press preferred to keep its eyes on the British and French preparations for an invasion of their own, claiming in a 1 November editorial that Anglo-French motives were ‘suspect’ – they were using the Israel-Arab conflict as a pretext to occupy the Canal Zone; it offered Ireland’s sympathy to the people of Egypt, and said that Britain and France ‘stand condemned’, but avoided condemnation of Israel.

‘Israel Claims Victory’ was the Press headline on 2 November. Both papers carried reports of a speech by Minister for External Affairs (and future Taoiseach) Liam Cosgrave at the Dublin Chamber of Commerce condemning the action of the UK and France in siding with Israel in the use of force against Egypt. Though he was not “setting up in judgment” on the issues dividing Israel from its neighbours, which were “complex questions”, “whatever the provocation may have been, it was clearly Israel that was the aggressor; it was Israel not Egypt that ought to be restrained, and it was the UN, not England and France that ought to do the restraining.”

That speech saw the birth of a tradition in Irish foreign policy vis-à-vis Israel that has endured to this day: ignore the big picture, set up a moral equivalence between the aggressor and the victim, and blame Israel for defending itself.

The Press editorials of 2 and 3 November voiced support for Egypt but did not mention Israel; all the paper’s condemnation was reserved for Britain and France, whose action “has gone far to undermine the moral position of the West”.

The Independent editorial of 3 November, ‘The Wise Course’, again dismissed Israel’s concerns and wagged its finger at the UN (of which Ireland had been a member for less than a year), saying that it must share in the blame for the Middle East disturbances of the last 7 years, notably its failure to carry out its own plan for the internationalisation of Jerusalem (an old hobby-horse of the Independent that ignored all the developments since the Arab rejection of the UN 1947 partition resolution) and its neglect to resettle hundreds of thousands of Arab refugees.

The relatively milder stance of the Press on Israel was underlined on 5 November when it carried a prominent report of a speech by Dublin’s Jewish Lord Mayor Robert Briscoe TD (1894-1969, a veteran of the Irish War of Independence, member of Fianna Fáil and friend of both De Valera and Ze’ev Jabotinsky) at Terenure Hall at the annual sale of work organised by the Daughters of Zion.

Israel’s neighbours, Briscoe said, had declared war on Israel eight years ago, especially Egypt, and despite defeat had never cancelled the declaration. Israel had been denied the use of the [Suez] Canal. Nasser had declared his intention to annihilate Israel completely. “Those who attempt to malign our creed will have to admit that our little nation was passive in its resistance, and the situation will react on the real aggressors… we must prepare our boys and girls to go out and be ready to die in battle if necessary, and if they go down, they will go down in glory…”

That day, British and French paratroopers landed in the Canal Zone. The US, fearful of losing all influence in the Arab world to the Soviets, immediately condemned this action and led opposition to it at the UN. A ceasefire was in effect by 6 November. The US called on Britain, France and Israel to withdraw their forces from Egypt. Eisenhower personally appealed to Ben-Gurion; the latter reluctantly agreed subject to the deployment of a UN police force. The Press reported on 19 November that Ben-Gurion had rejected a Soviet demand to pay compensation to Egypt; it was Israel, he said, that was entitled to compensation.

British and French troops were evacuated on 22 December; the Israelis did not withdraw until February 1957.

Space here does not allow a discussion of the disastrous political repercussions of the Suez episode for Britain and France. Israel came out of it better: it did not gain access to the Canal, but did win free passage through the Gulf of Aqaba and a US guarantee that Gaza would not be used for new fedayeen attacks. Most importantly, it bought time against Egyptian aggression: the UN Emergency Force deployed in the Sinai would ensure 11 years of peace.

By the end of the Suez hostilities, world attention had been diverted to a new arena. Soviet tanks and troops that had seemed to be leaving Hungary had circled around and returned to Budapest to restore the communist regime. By 4 November they were ruthlessly crushing the revolt, leaving thousands dead and wounded. Catholic Ireland watched transfixed as Cardinal Jozsef Mindszenty sought asylum in the US embassy.

The Irish Press editorial on 5 November was titled ‘A Nation’s Agony’. The nation in question was not Israel, but Hungary.