“Huge Jewish Lobby” What On Earth Is Niall Collins TD Thinking Of?

For a man who claims to champion human rights and who is concerned about the persecution of minority groups, we were very disturbed, on a number of fronts, to come across a recent YouTube video of Niall Collins, Fianna Fáil Spokesperson for Foreign Affairs and Trade, essentially propagating a conspiracy theory about Jewish people controlling the media.

Questioned by the show’s host, Waqar Rizvi, about “suppression of criticism related to Israel”, Collins replied: “There is an effort to suppress any criticism and any speaking out about against the suppressive policies of Israel”. He then goes on to say he has been “targeted” by people on social media “trying to suppress and drown out” his voice.

According to Niall Collins, it is “a form of extremism” emboldened by the present Israeli government and [their] policy of constantly building settlements and [their] treatment of the Palestinian people”, and that this policy is fully supported by the American/Trump administration. 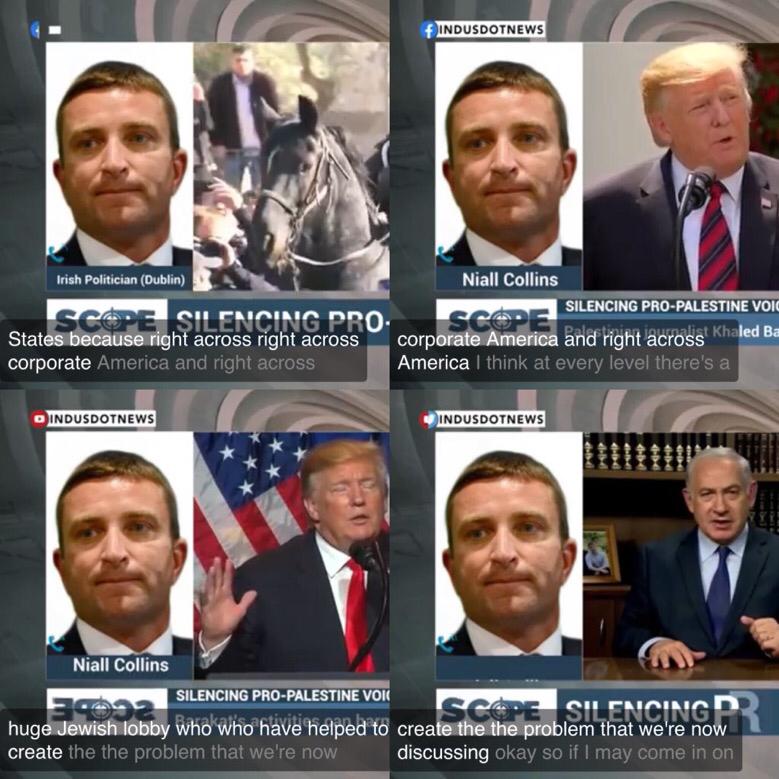 However, and this is where it gets disturbing, Niall Collins “wouldn’t entirely blame the Trump administration when we’re apportioning blame to the United States, because right across corporate America and right across America at every level there’s a huge Jewish lobby who have helped create the problem we are now discussing”. He was immediately cut off by the host at this point. Enough said?

Segment starts at 22:49.
Not only is he wittingly or unwittingly sharing classic antisemitic tropes about Jews, but he was sharing a platform here with ‘Journalist’ Khaled Barakat. You may remember the German police prevented Barakat from speaking at a series of events in Germany in June of this year. https://www.jpost.com/International/After-permitting-entry-Germany-bars-talk-of-terrorist-with-Hezbollah-ties-594384
Khaled Barakat is considered to be one of the most prominent leaders of the Popular Front for the Liberation of Palestine (PFLP) and serves as one of its senior commanders, bearing the title “Head of PFLP Foreign Operations Department”. We would like to know if Niall Collins is aware that the PFLP is a designated terrorist organisation, not only in Canada, USA and Israel, but also within the European Union, of which Ireland is a member State.
Holding to a Marxist, national-secular ideology, the PFLP was the first Palestinian organisation to hijack passenger planes in the late 1960 and 1970s. Its military branch operating out of Gaza participated in the violent border riots known as the March of Return (which began in March 2018 and are led by Hamas).

In 2017 Barakat posted a photo of himself wearing a PFLP beret, with its symbol and logo, and holding a piece of paper that reads: “down with Israel and down with the Palestinian Authority”. In addition, the official logo of the BDS movement appears in the bottom left corner of the photo.

Barakat wearing a PFLP beret, with its symbol and logo, and holding a piece of paper that reads:
“down with Israel and down with the Palestinian Authority”.

On November 23, 2017, PFLP’s official Twitter account tweeted an article by Khaled Barakat. In the article, Baraket stresses the need for a popular Palestinian movement in the diaspora, one that seeks radical revolutionary change by partnering with groups such as African-Americans in the US and liberation movements in third world countries. Barakat argues that this Palestinian movement in the diaspora should be created within the framework of the civil and armed resistance, and as a part of the expansion of the boycott and isolation of Israel.

We could go on…

Niall Collins… what on earth are you thinking? We really need to know!