Did an Irishman influence Napoleon to become a Zionist?

Home » Stand with Israel – Ireland Israel Blog » Did an Irishman influence Napoleon to become a Zionist?

Almost exactly 220 years ago – on April 20, 1799, which was the first day of Passover that year too – Napoleon Bonaparte issued a proclamation to Diaspora Jews to return to the Land of Israel and re-establish their state there.

In 1799 Napoleon marched on Palestine from Egypt, conquering the coastal towns, the Sharon and Galilee. His reconnaissance parties reached Safed, but fortified Acre stood firm and refused to surrender to the pressure of his Army.

Napoleon’s advance involved a significant historical fact: his attempt to win the good will of the Jews of Syria and Palestine, and indeed of the world, by his official pledge to restore Palestine to the Jews and establish a Jewish State.

Napoleon intends “to restore to the Jews their Jerusalem”, read a French newspaper report at the time, while another report claimed that “Bonaparte published a proclamation that calls on all the Jews of Africa and Asia to rally around his flag in order to re-establish ancient Jerusalem”.

While the proclamation itself was never found, a copy translated to German was uncovered in 1939, addressed to “the Jewish nation from France’s top general, Bonaparte, and Rabbi Aharon in Jerusalem”, saying, “Israelites, France offers you at this very time… Israel’s patrimony; take over what has been conquered and with that nation’s warranty and support, maintain it against all comers.” 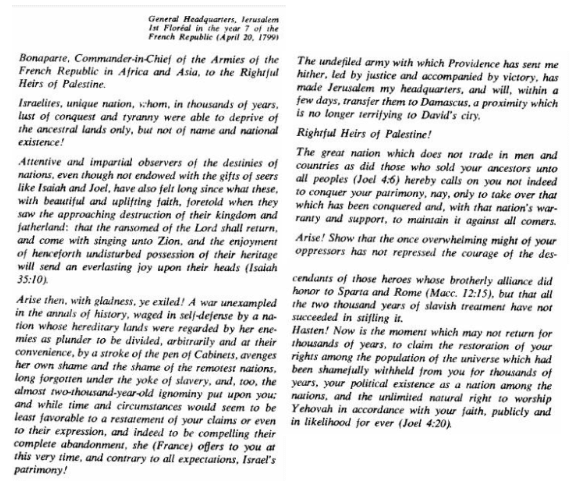 Some hold the statement to be an attempt to lure Haim Farhi, a Syrian Jew and chief advisor to Ahmad al-Jazzar of Acre, to betray his master by switching his support to the French. Whether this is true or not, Farhi defended the city with the rest of the Turks. Farhi played a key role in the city’s defense. As al-Jazzar’s adviser and right-hand man, he directly supervised how the battle against the siege was run. At the culmination of the assault, the besieging forces managed to make a breach in the walls. After suffering many casualties to open an entry-point, Napoleon’s soldiers found, on trying to penetrate the city, that Farhi had in the meantime built a second wall, several feet deeper within the city where al-Jazzar’s garden was. Discovery of this new construction convinced Napoleon and his men that the probability of their taking the city was minimal. The siege was raised and Napoleon withdrew to Egypt. 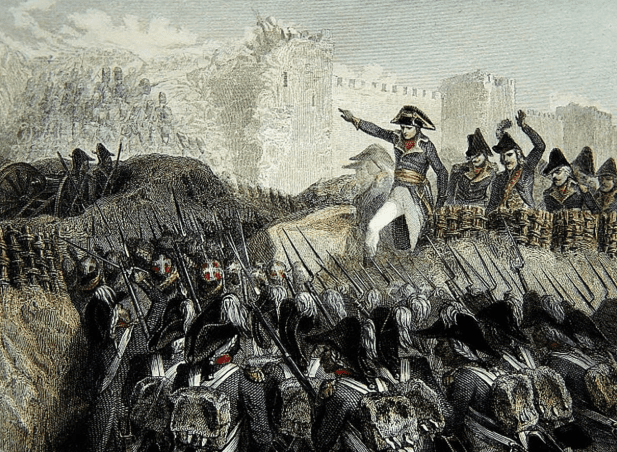 Napoleon at the siege of Acre in 1799 (Source: http://napoleon.nli.org.il)

Napoleon may have been influenced by a letter, written to Napoleon’s patron in February 1799 by an Irishman named Thomas Corbet, a devout Protestant who rebelled against England and joined the French army together with his brother William. During his service, he wrote the letter to the leader of the French Directory, who at the time was Paul Barras, Napoleon’s patron. In the letter he details, in slightly poor French, a proposal saying ‘I recommend you, Napoleon, to call on the Jewish people to join your conquest in the East, to your mission to conquer the land of Israel.’

This letter and other contemporary writing probably inspired Napoleon to write his 1799 letter, a remarkable declaration by France that predated the Balfour Declaration by 118 years. 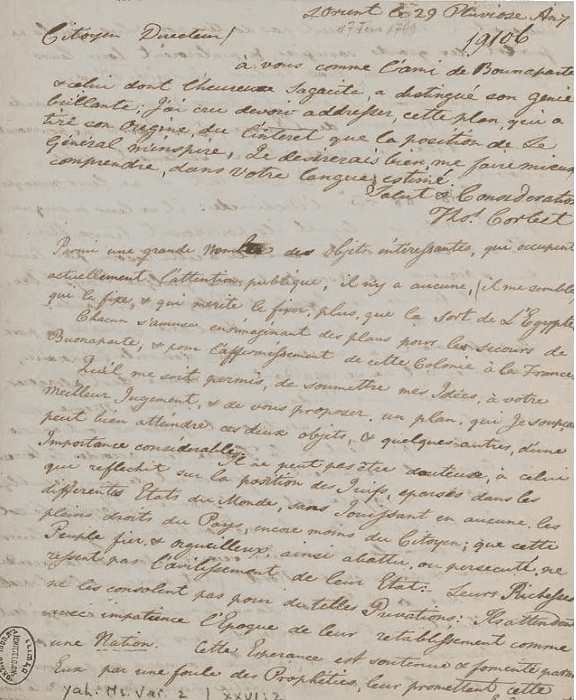 On July 24 1922, all fifty-one member countries – the entire League of Nations – unanimously adopted these principles, by making the Mandate of Palestine declaration giving recognition to “the historical connection of the Jewish people with Palestine and to the grounds for reconstituting their national home in that country”

That declaration laid down the legal right of the Jewish People to settle anywhere in western Palestine, between the Jordan River and the Mediterranean Sea, an entitlement unaltered in international law and their right to reconstituting their national home – the State of Israel.