How many times must we debunk the Khazar nonsense?

Home » Stand with Israel – Ireland Israel Blog » How many times must we debunk the Khazar nonsense?

A recent tweet (1) by one of Al-Jazeera’s leading anchors (her name is Ghada Oueiss) has reignited discussion of the Khazar theory and its supposed implications for the claims of the inhabitants of the modern state of Israel to the land of Israel. What’s the Khazar theory, you might ask?

Well, the theory rests entirely on the alleged conversion of an ethnic Turkic race called the Khazars to Judaism towards the end of the first millenium CE – reportedly in the ninth century. These are supposedly the ancestors of many of the ancestors of modern day Israel and – since they’re Turkic – they can’t be “real Jews” who can trace their origins back to the biblical Land of Israel.

This theory is regularly used online by those who oppose the existence of the modern state of Israel. If many or most modern day Jews aren’t descended from the Jews who inhabited that country two thousand or so years ago, then they have no right to live in Israel today.

The Khazar Kingdom was in the general region of modern day southern Russia and the Ukraine – between and north of the land between the Black Sea and Caspian Sea. The idea is that these Khazars are the ancestors of the Ashkenazim – the Jews of Eastern and Central Europe, as opposed to, for example, the Sephardim who are descended from Jews expelled from Spain and Portugal in the late 15th century or the Mizrachim whose historic links are to Babylon and the wider Middle East.

For starters, if a nation needs to prove its historical connection to a piece of land in order to inhabit it, then the citizens of Australia, New Zealand, Canada, the United States of America, Mexico – indeed all the countries in North and South America are in difficulty. Also, the Ashkenazim are a minority amongst Israeli Jews with Mizrachim and their descendants comprising a majority of that population. Leaving these issues aside, from a purely factual point of view, the “Khazar” theory is problematic for a few extremely basic reasons.

In 922 CE, the Arabic writer Ahmed ibn-Fadlan was travelling in the Khazarian kingdom and writes of his impressions and experiences (2). He does indeed confirm that the king is Jewish but Jews represent a minority in the kingdom. Most Khazarians are Muslims or Christians. There is also evidence of very un-Jewish practices such as the ritual murder of the king if he is deemed to have “decayed” mental powers and impaired wisdom. This is backed up by other Arabic writers and travellers such as Al-Masudi and Istakhri (ibid).

Some evidence from burial customs has been put forward by one archaeologist in favour of widespread conversion to Judaism. There was a noted switch from pagan-style burials with the grave packed with the goods and effects of the deceased to the far simpler shrouding of the body (3). But this reveals precisely nothing other than a switch from pagan burial customs. It is widely known that the Islamic community also covers its deceased in shrouds (4). Given the reports mentioned above, surely it’s a sign of a conversion to Islam.

Some readers here might be familiar with the writings of the Israeli academic, Shlomo Sand, writer of the book “The Invention of the Jewish People”. The Khazar thesis is crucial to his view that modern day Jews are not descended from ancient Israelites and the presence of many blonde, blue-eyed people amongst the Ashkenazim is frequently referred to in the discussions of his theories (16). 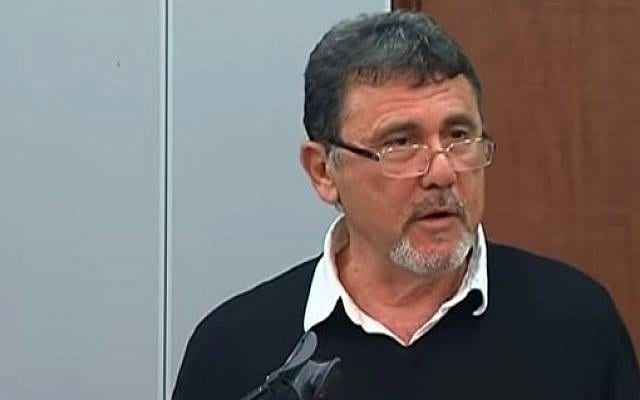 On the far-right, Professor Shlomo Sand is definitely the favouritest Jew ever (Source: Times of Israel).

Professor Sand tries to get around the difficulties posed by the descriptions of the above Arabic travel writers by proposing that Judaism gradually “trickled down” over a period of 200 to 400 years from the aristocracy (5). Correctly, he points out how in the 8th, 9th and 10th centuries, many parts of the European peasantry had yet to embrace Christianity. However, over the period of many generations, under the impetus of a ruling hierarchy (or a series of changing rulers) that was/were all Christian, Christianity did finally become embedded in all parts of European society. Hence, it would be reasonable to propose a similar process occurring with Judaism in the Khazarian kingdom if time allowed.
Unfortunately for those adhering to the Khazar theory, a few decades after those Arabic travel writers referred to the vast majority of the population being Christian or Muslim, the Khazarian kingdom was effectively wiped off the map in the year 965 by Sviatoslav of Kiev (6) and the entire kingdom subsequently collapsed. So the period of time required for Shlomo Sand’s proposed conversion of all Khazarians to Judaism simply does not exist. Not. Even. Close.
There are very few written remains of the language spoken by the Khazars. However, from the few fragments that have survived, it seems beyond reasonable doubt to deduce that the language was Turkic in origin. References to the language from that time by non-Khazars would back that up (14).
Of course, the language spoken by the Ashkenazim was and in some cases still is Yiddish. This language which originated sometime around the 10th century CE in Central Europe has been highly absorptive in keeping with the traditions of a migratory people who would have come in contact with societies speaking a wide range of dialects. Hence, it contains Hebraic, Germanic, Slavic and Romance elements (15).
For the purposes of this Ashkenazim-as-Khazars thesis, there is one glaringly obvious omission from the above list of language groups: Turkic. We are supposed to believe that a Turkic speaking people moved west into Europe and created this language from various other language groups with which they’d hitherto had little or no contact while simultaneously abandoning all traces of their own Khazar language. Indeed, not only did they abandon their language: they also, it seems, abandoned their Khazar names since there is no tradition of Turkic names amongst the Ashkenazim and there never has been.
It’s not the intention of this writer to use a sledge hammer to crack this particularly brittle nut but in the last ten years, extensive archaeological evidence has emerged to sound yet another death knell for this theory – if one can speak of multiple death knells. A Russian archaeologist, Dmitry Vasilyev, has recently – near the Caspian Sea – uncovered what appears to be traces of the capital city of the Khazars (7). The evidence that it is a Khazar city is extensive – from its location, ceramic artifacts and the architecture (8). Crucially, no Jewish artifacts have been found at this site and indeed very few (such as mezuzas or Stars of David) have been found at other Khazar sites proving, says Vasilyev that ordinary Khazars preferred traditional beliefs such as shamanism, or Islam.
Unsurprisingly, the genetic evidence provides yet further confirmation that the Khazars have few if any links with the modern day Ashkenazim. Indeed, what stands out from the research is the degree to which, genetically speaking, the various strands of Jewishness are more closely related to each other than to nearby non-Jewish groups (9 & 10). There was evidence of extensive mixing of Jewish and non-Jewish populations in ancient times (over 2000 years ago) when Jewish communities migrated around the Mediterranean (11). Indeed, at all times, there would have been low levels of intermarriage of Jew and Gentile. However, there is nothing to suggest that anything like appreciable numbers of modern day Jews have their origins in past conversions.
No-one is claiming that every single Jew alive today has a family tree free of non-Jews. There has been inter-marriage – enough to explain the existence of blonde and blue-eyed Jews amongst Ashkenazi people (16). However, no-one should be under any illusions that black hair was universal amongst the ancient Israelites. By all accounts, King David had red hair as did Judas Iscariot (12)
In any case, even in countries such as Algeria, Morocco and Tunisia where black hair would be almost universal amongst the non-Jewish population, researchers reported finding members of the Jewish community with blonde hair (13).
The Khazar theory brings together some strange bedfellows. You find the left-wing types who in all other circumstances would eschew with distaste all discussion of race. However, for the purposes of delegitimizing the State of Israel, this and so much more is permissible. Under the same ideological duvet, you also have the far right. They….well, let’s not over-analyze. They just don’t like De Jooz. They never have and they never will. Stormfront.org has for some time been in quite a lather of excitement over the Khazars and Shlomo Sand is definitely their favouritest Jew ever.
In the ongoing campaign to deny Israel’s right to exist, it suits the far right and elements of the left to insist that European Jews are too blonde and blue-eyed – too “Aryan”, if you will. Funny that – a mere 70-75 years ago, 6 million European Jews were murdered for precisely the opposite reason.

9. Tracing the Roots of Jewishness – ScienceNOW

10. The Roots of Jewishness – ScienceNOW