Hamas is anti-Christian as well anti-Jewish, both ideologically and practically.

Hamas’s positions towards Christians are evident in their founding document, the 1988 “Covenant of the Islamic Resistance Movement” which includes several anti-Christian statements.

The Covenant marks a clear goal for Islam to dominate and subdue followers of Christianity with a thinly veiled threat that Hamas will not allow peace and quiet otherwise: 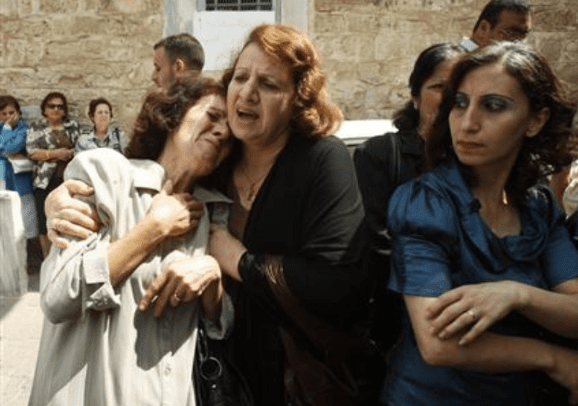 Distraught Gazan Christians protest against imprisonment of their coreligionists and forced conversions to Islam (Source: Reuters)

The Covenant calls Christians “infidels” and rejects them as arbitrators or peace brokers:

“Now and then the call goes out for the convening of an international conference to look for ways of solving the (Palestinian) question… These conferences are only ways of setting the infidels in the land of the Moslems as arbitrators. When did the infidels do justice to the believers?

‘But the Jews will not be pleased with thee, neither the Christians, until thou follow their religion; say, The direction of Allah is the true direction. And verily if thou follow their desires, after the knowledge which hath been given thee, thou shalt find no patron or protector against Allah.'”

Based on this Islamist-supremacist ideology, Hamas has committed and/or allowed horrific oppression and violence against Christians since it came to power in Gaza in 2007:

In April 2007, a bomb severely damaged the Christian Palestinian Bible Society building in Gaza, which has been operating since 1999.

In October 2007, a Palestinian Christian activist who had received repeated death threats was found stabbed to death in a street in Gaza

In 2008, the Meir Amir Counter-Terrorism center reported a sharp increase in attacks on Christian institutions in the Gaza Strip

Since the PA left the Gaza Strip in 2007, Hamas cancelled Christmas. Festive celebrations and displays of crucifixes have become taboo

The Christian population in Gaza has dwindled from 5,000 a decade ago to about 1,000 now.

In 2012, a public protest was organized by dozens of Christians who claimed that two Christians were forcibly converted to Islam and were being held against their will.

Under the Hamas regime, Christians are threatened by Salafists who forced closure of Christians institutions, schools and places of entertainment.

A 2010 Israeli TV news story gives a good summary of the fate of Christians in the strip.

Recently, a video showing a Gazan Christian talking about the bad treatment he received at a Hamas-run hospital because of his faith went viral and has sparked heated debates on social media, causing embarrassment for Hamas.

Despite so much evidence of persecution by Hamas, some international Christian individuals and institutions support Hamas.

Christian leaders are signatories to the infamous “Kairos Palestine” document, which has been described as a “copy of Hamas and Fatah ‘talking points’ wrapped in religious packaging”.

In 2014, a church in Copenhagen placed a massive banner just outside its doors expressing sympathy for the Palestinians – using a Hamas slogan “from the river to the sea”.

In 2018, the Presbyterian Church General Assembly voted against resolutions that mentioned transgressions by the terrorist group Hamas, while passing BDS resolutions condemning Israel.

Also in 2018, the World Council of Churches published a statement on the Gaza border riots adopting the Hamas narrative, condemning Israel while totally ignoring Hamas’s role in the riots.

Also, a top official of World Vision, a Christian Aid Group official was indicted by Israel with funneling funds to Hamas.

Trócaire, the official overseas development agency of the Catholic Church of Ireland funds BADIL, a pro-HAMAS Palestinian NGO. BADIL reported favorably about HAMAS’s election victory in 2006 and BADIL’s Noura Erekat has spoken in support of HAMAS-led riots in Gaza in 2018.

Those Christians often hide behind the official Hamas position that “Hamas protects Christians”. Those are empty words. The ongoing persecution, the number of anti-Christian incidents and the shrinking Christian population proves the opposite is true.

In fact, those self-hating Christians are willing to throw Gazan Christians under the bus in order to promote their anti-Israel agenda.