In what is a major blow to the BDS movement, the divisive, discriminatory and illegal “Occupied Territories” Bill does not form part of the final Programme for Government in Ireland, a coalition made up of Fianna Fáil, Fine Gael and the Green Party.

The ill-conceived and shameful Bill, which targeted goods and services produced wholly or partly by Israelis in Judea, Samaria and East Jerusalem, would have criminalised Irish citizens with fines of up to €250,000 and a five-year prison term. It would also have devasted the livelihoods of thousands of hardworking Palestinians and their dependents who work in industrial zones such as the Barkan Industrial Estate in the West Bank, and which we visited last September.

The Bill would also have contravened stringent US anti-boycott legislation which is currently in place across twenty-eight US States. At a time when Ireland “seeks to strengthen our diplomatic, cultural, and economic relationship with the US at all levels” and “act as a bridge between the transatlantic relationship between the EU and the US”, a boycott Bill would have caused considerable problems.

Another significant issue with the boycott Bill, and one that was not mentioned in the Irish mainstream media, despite the fact that we produced this video, is the impact it would have had on the religious freedoms of Irish people; freedoms that are enshrined in European and international conventions and declarations and in Article 44(2) of the Irish Constitution.

The shameful and illegal Bill, which was introduced in Seanad Éireann on 24 January 2018 was drafted by the Global Legal Action Network (GLAN) on behalf of a coalition of other NGOs including Sadaka, Trocaire, Christian Aid Ireland and the Irish Congress of Trade Unions and heavily promoted by the Ireland Palestine Solidarity Campaign (IPSC) and other groups in Ireland, as well as Al-Haq, a Palestinian NGO engaged in anti-Israel “lawfare” and BDS campaigns.

You may be interested to read NGO Monitor’s factsheet on the activities of Al Haq, which can be accessed here.

Since July 2018, a few short months after the Ireland Israel Alliance was founded, we staged numerous demonstrations outside Dáil Éireann, spoke on Irish broadcast media, had letters published in the Irish Times and wrote to political party leaders, TDs and Senators to advise them of the discriminatory nature and legal issues surrounding this divisive Bill.

We would now like to take the opportunity to thank those of you who joined in our demonstrations and took an active part in our campaigns.

A very special thanks also to UK Lawyers for Israel, for their assistance in drafting our written submission to the Committee on Foreign Affairs, Trade and Defense. We have no doubt this submission played a significant role in our fight against the discriminatory and illegal Bill. A copy of our submission can be viewed in the Campaigns section of our website.

The final Programme for Government, issued on Tuesday, can be accessed here. The issues relating to Israel and the Palestinian Authority can be found on pages 111 – 112 and highlighted in yellow, below. 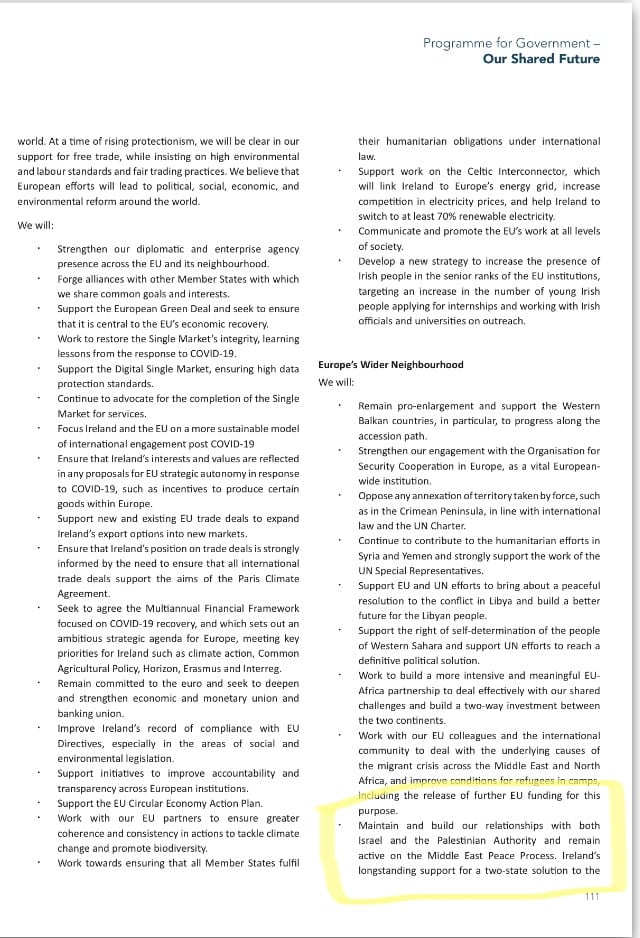 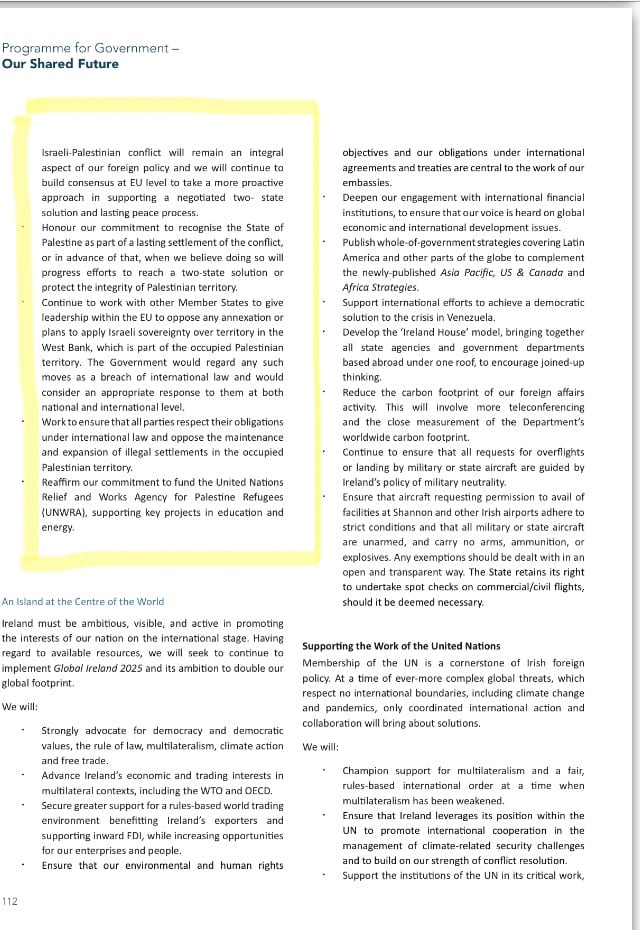 On a final note, those who abuse international law by citing Article 49(6) of the Fourth Geneva Convention to justify boycotting Israel should remember that occupation only occurs when a country takes over the sovereign territory of another country. The West Bank was never part of Jordan, which seized it in 1949 and ethnically cleansed it of its entire Jewish population. Nor was it ever the site of an Arab Palestinian State.

According to professor Eugene Kontorovich, one of the world’s pre-eminent experts on universal jurisdiction and an international law expert:

“A country cannot occupy territory to which it has a sovereign title, and Israel has the strongest claim to the land. International law holds that a new country inherits the borders of the prior geographical unit in that territory. Israel was preceded by the League of Nations Mandate for Palestine, whose borders included the West Bank.”

Professor Kontorovich’s excellent analysis Unsettled: A Global Study Of Settlements In Occupied Territories provides a comprehensive examination of the international community’s treatment of settlers in all situations governed by the Geneva Conventions.

Meanwhile, we are under no illusion that we have heard the last of this Bill.