A Homage to Primo Levi

Belated (out by a few days, sono spiacente) 100th birthday greetings to Primo Levi. He was a writer, an Italian, a Jew, a student of chemistry and a survivor of the indescribable horrors of the Shoah also known as the Holocaust. Primo Michele Levi was born in Turin (Torino) on July 31st 1919. He was born into a middle class Jewish Italian family whose father – Cesare – worked for the Hungarian Ganz group of companies and who consequently spent many of the early years of Primo’s life working in Hungary.
He entered the Felice Rignon primary school in Torino in 1925. He excelled there academically despite being a thin delicate child whose years at the school were marked by long periods of absence due to illness during which he had to be tutored at home. In 1930, he began attending the Massimo d’Azeglio Royal Gymnasium 12 months ahead of the usual academic requirements. He was the only Jew in his class and that may have contributed to his being bullied although he did also excel academically there, despite being the youngest student in his class. 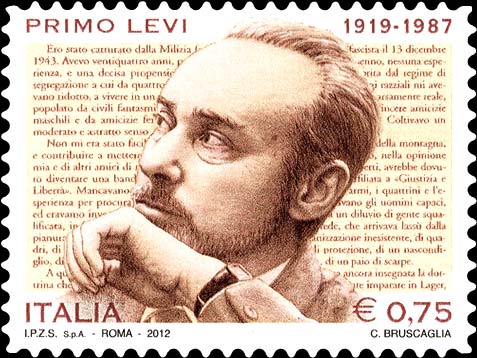 He was particularly impressed by “Concerning the Nature of Things” by the British scientist, Sir William Henry Bragg, and based on that work, he decided that he wanted to be a chemist. In October 1937, he enrolled at the University of Turin to study chemistry. As one of 80 candidates, he spent an initial trimester taking lectures, and in February 1938, after passing his oral examinations, he was selected as one of 20 to join the full-time chemistry curriculum.

However, Italy was increasingly in the grip of the fascist dictatorship of Benito Mussolini which – following the appointment in Germany of Hitler as Reichskanzler on January 30, 1933 – sought more and more to pander to the vile antisemitic spewings from the large country north of the Alps.

In July 1938 a group of prominent Italian academics published the so-called “Manifesto of Race”, a mixture of Social Darwinism and antisemitic ideologies from various questionable sources. It formed the foundation for the Racial Laws of October 1938. After the passing of these laws, Italian Jews lost much of their basic human rights, whatever positions they held in public offices, and their financial assets. Their books were banned and Jewish writers could no longer have their articles published in magazines owned by so-called Aryans. Fortuitously for Levi, Jewish students who had begun their courses were allowed to continue, but new Jewish students were barred from entering university. Levi had started his course a year earlier than scheduled, thus allowing him to continue taking a degree.
He graduated in the summer of 1941 with full marks and merit but the racial laws meant that his degree certificate bore the remark “of Jewish race”. Hence, he had difficulties finding a suitable permanent job after graduation. However, he did eventually find work clandestinely at an asbestos mine in San Vittore and later, at a Swiss company in Milan.
Levi was eventually captured by the fascist militia in late 1943 and sent to an internment camp at Fossoli outside Modena. Conditions there were reasonably good as long as it was under the control of Italians. However, once German Nazis took it over, they arranged for the deportation of Jews to eastern death camps such as Auschwitz.
The fact that Primo Levi survived the horrors of Auschwitz for nearly a year owed much to his knowledge of German and the fact that – with his chemistry qualification – he managed to secure a position as a worker in IG Farben’s Buna Werke laboratory. By avoiding hard labour in freezing temperatures out of doors he was able to survive. Of the 650 Italian Jews with whom he travelled to Auschwitz, Levi was one of only twenty who lived to return home. The average life expectancy of a new entrant at the camp was under 4 months. Auschwitz was liberated by Soviet forces in late January 1945, although it was to be October in that year before Levi got back home to Italy.
Whilst it was years before he received due recognition, Primo Levi did eventually become known as a great writer not only in Italy but internationally, especially for two works: “If this is a man” which deals directly with his experiences in Auschwitz and “The Periodic Table”, a truly extraordinary work of short autobiographical stories which the Royal Institution of Great Britain named the best science book ever written. In “The Periodic Table“, each story is given the name of a chemical element and proceeds to relate an episode of Levi’s life that is related to that element.
Despite his experiences, Primo Levi strove to see beauty and humanity in everything. “The Periodic Table” is suffused with the colours and smells of chemistry and the humour of humanity. In the chapter called “Iron”, he relates a story from his undergraduate days in March 1939 when he and his fellow students were conducting analyses on various substances to identify what elements they contained.
This was only a few days after the election of Cardinal Eugenio Pacelli as Pope Pius XII whose success was announced with the traditional Latin words “Nuntio vobis gaudium magnum; habemus Papam” (I announce to you a great joy; we have a Pope) from the balcony overlooking St Peter’s Square in Rome. In the words of Levi, “Through the murk and in the busy silence [of the university laboratory], we heard a Piedmontese voice say, “Nuntio vobis gaudium magnum; habemus Ferrum“. (I announce to you a great joy; we have Iron.)
Sadly, even as he attained greater recognition as a writer internationally, his life became increasingly marked by bouts of depression. Now, there is greater understanding of how the trauma of earlier experiences – such as what he saw in Auschwitz – can affect one in later life. However, in the 1960s and 1970s, the response was highly medicalized with different drugs being prescribed which had varying effects, by no means all positive.
Who was Primo Levi? A writer, an Italian, a Jew, a student of chemistry and a survivor of the indescribable horrors of the Shoah. He was a survivor – up to a point. Did he choose to fall or did he fall accidentally from that 3rd floor apartment in Torino in April 1987? We’ll never know for sure. He wrote a number of books but he also wrote “The Periodic Table” – a book which more than any other showed his rare ability to make the complex not just describable but beautiful, attainable and human. What more can I say about “The Periodic Table” in a blog article apart from saying that while you might have hated chemistry in school, you’ll hate it less after reading “The Periodic Table“? You might even wish you’d loved it.
May his memory be a blessing. Che la sua memoria sia una benedizione.