1880: The Desolation of Palestine

We’ve all seen that incredible, shrinking Palestine map; supposedly showing the loss of Arab Palestinian land over the last 80-100 years.

The map is based on the utterly risible notion that any land not owned by Jews before 1948 must – de facto – be owned by Palestinian Arabs. Why? Because (obviously!), the autocratic Ottoman Turkish rulers of the region played by the same rules as modern western democracies do today.

Upon such nonsensical idiocies are many of the erroneous assumptions about the Israeli-Arab issue built. As described here and here, only a tiny percentage of the land was privately owned by anyone in the true western sense of the word and the Ottoman state arrogated to itself ownership of the vast vast bulk of the land area. It also arrogated to itself the right to impose pretty much any level of taxation on pretty much anyone with the consequences described below.

The guy who writes the IsraellyCool online column recently uncovered a fascinating New York Times article from 1880 describing conditions at the time in what is now modern Israel. Unsurprisingly – in a region where there was little real sense of private ownership of a holding – what emerges is a story of appalling mismanagement and neglect by the Ottoman Turkish rulers.

It’s a dirt poor country and in a state of utter desolation. The forests are rapidly disappearing and not being replaced. There is literally not one road in the entire country; the best “thoroughfare” being a mud track between Jaffa and Jerusalem. The few people who live there do so in a state of absolute poverty in mud hovels with barely enough clothes to clothe themselves. 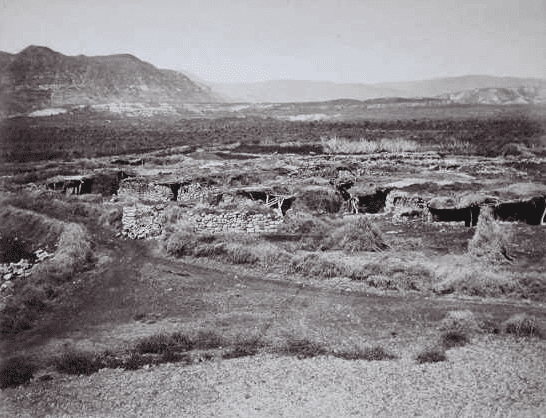 Palestine in the late 19th century: “The villages – nothing but mud huts, dust, dirt and squalor” (Source: Félix Bonfils)

While the author comments on the fertility of the soil, he notes that the few inhabitants seem unable or unwilling to take advantage of it with the exception of a German colony at Mount Carmel. That might be in part due to the heavy levies imposed by the Turkish rulers: “Everything is taxed; every fruit tree, so none now are planted; every cow or horse &c; every vegetable sold out of a private garden. Every eighth egg is […] taken by the government”.

All in all, it’s a country in rapid decline, clearly unable to support the few who are trying to scratch out a living there.

The contrast with Israel today also couldn’t be greater; a wealthy and stable democracy which exported over 2 billion US dollars’ worth of agricultural products in 2017; this from an area the same size as the province of Leinster . The agricultural sector as a whole had an output of 8 billion US dollars in 2017. Had the modern State of Israel not re-emerged in 1948, what would be there in its stead would be pretty much what you see today in most of the rest of the Middle East and North Africa: a dirt poor state, ruled (perhaps intermittently) by autocrats, riven by sectarian and clan conflicts, and offering its people little in terms of an economic future apart from a rickety boat across the Mediterranean to Europe.

For all those who oppose the existence of the State of Israel (and there are far more than are willing to admit it), this should make for painful reading. However, can they deny it? No, they can’t.